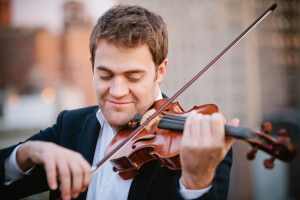 New York-based violinist Owen Dalby ’06BA, ’07MM has been named the new second violinist with the St. Lawrence String Quartet (SLSQ). He will join the group in June 2015.

Dalby, a graduate of Yale College and the Yale School of Music, has won acclaim as a soloist and chamber musician. “I’ve always considered string quartet playing as the pinnacle of what I could possibly do with my musical career,” said Dalby in press materials, “so for me, this is the opportunity of a lifetime.”

“Owen has an incredibly generous spirit and shares our passion not only for the quartet repertoire but for all that goes into bringing music to life,” said founding member and first violinist Geoff Nuttall. “We are thrilled that he has agreed to join the SLSQ family.”

Departing violinist Mark Fewer has been appointed William Dawson Scholar at the Schulich School of Music at McGill University in Montreal, Canada. Dalby will first take the stage with the group this coming June, at the Spoleto Festival USA in Charleston, South Carolina, where his SLSQ colleague, Geoff Nuttall, also serves as the director of the festival’s chamber music series.