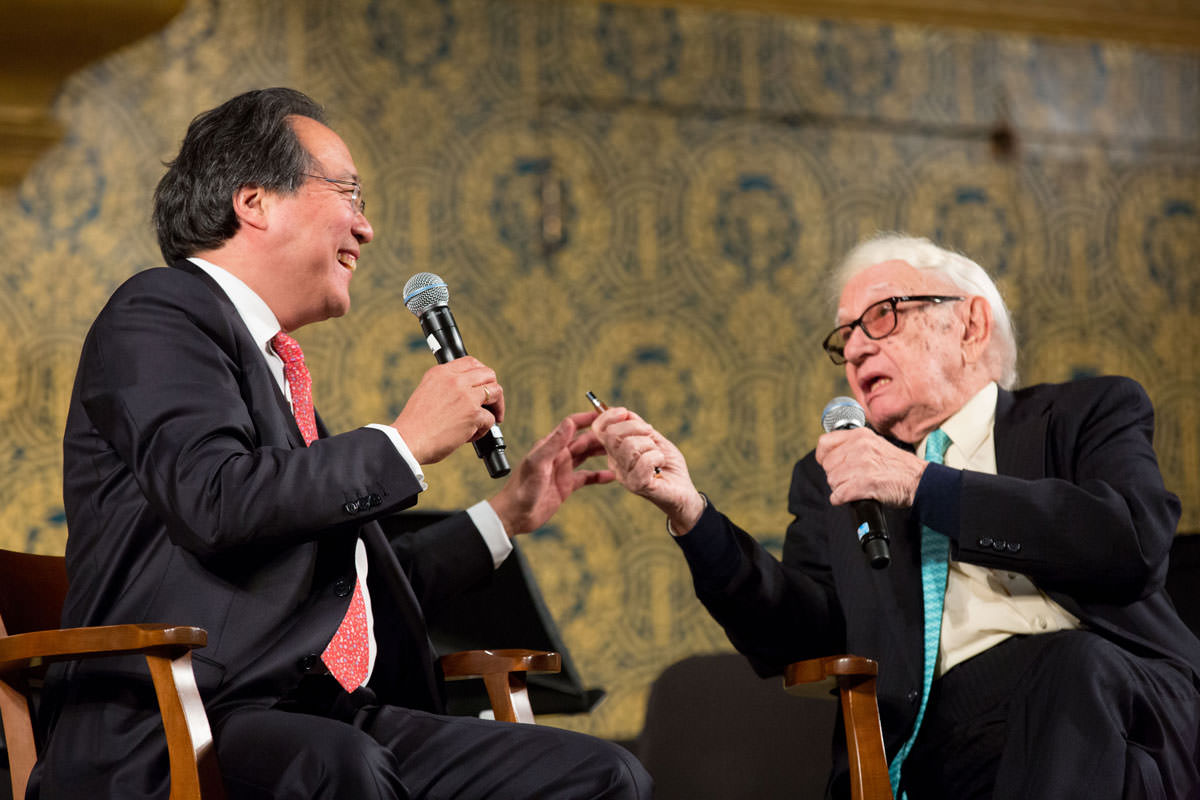 If Yo-Yo Ma and fellow master cellist Aldo Parisot ’48Mus were a comedy duo, there’s no question who would be the straight man and who would deliver the punch lines. Ma and Parisot made it clear to a packed house at Woolsey Hall on January 13, in an unusual performance: they sat onstage and chatted.

The occasion was a concert to benefit a School of Music fund for cello students—and to celebrate Parisot. He’s Yale’s longest-serving faculty member and should probably be classed as an official Yale treasure. His bio is full of impressive lists. Born in Brazil, he has soloed with the great orchestras and conductors of the world, toured the globe many times, recorded with fine-arts labels, taught at leading US conservatories.

Most of the program featured instruments, not voices. In a Jean-Baptiste Barrière cello duet, Ma and School of Music faculty member Ole Akahoshi spun streams of Baroque filigree with impossible ease. Ma delivered a powerful and transcendent Bach solo suite, No. 3. (More than one person in the audience cried.) He also performed a fiery Haydn Cello Concerto No. 1, accompanied by a group of music school students and alumni conducted by Parisot.

Parisot didn’t perform on the cello; at 93, and after 56 years teaching at the School of Music, he’s entitled to sit down and conduct. He did star in the Ma-Parisot vocal duet. The program gave the restrained title “A Conversation”—but the two are old friends, and they could have been trading jokes on a talk show. Ma was the witty host with the smooth tenor, Parisot the exuberantly unpredictable interviewee. A sampling:

On trust. Just before their talk, School of Music dean Robert Blocker awarded them both the Sanford Medal, the school’s highest honor, and gave them commemorative fountain pens. Parisot immediately tried his out to make sure it worked.

On being interviewed. Parisot: “What do you want to know from me? In case there is something that I don’t know or don’t like, I answer in Portuguese.”

On teaching. Ma: “I’ve heard so many of Aldo’s [cello] students all over the world. They all sound different.” Parisot: “Thank you! One Aldo Parisot is enough!”

On good wishes. When Parisot’s roommate discovered he was out of money, he and fellow students “looked for a job for me. The only job available at that time was to clean the bathrooms of Yale.” Ma: “That’s an honor.” Parisot: “I hope that you never have to do that.” Ma: “I’m kidding.” Parisot: “I’m kidding also.”

On aging. Parisot: “You came here 20 years ago. I called you on the phone—remember?” Ma: “I don’t remember—” Parisot: “You’re getting old! Do you remember to play the Haydn concerto now?”

But on the most important question, Parisot gave the rest of us a glimpse of what it must be like to have known virtuosity—the ability to play the greatest music in the world at a level past perfection.

“I can answer you quickly,” said Parisot. “Why are you so happy all the time? You have every reason, because everything that you dreamed of in your life came true.”