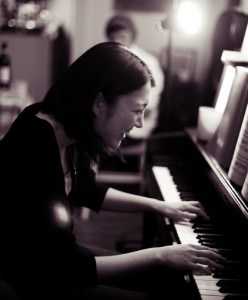 A while back, we told you about Music Haven’s successful Kickstarter campaign that led to funding NewMusic4us, and now there’s a concert to celebrate the result.

“So far, we’ve received three commissioned pieces out of the four we fundraised for NewMusic4us,” said Sawada in an email, “and Music Haven teachers (myself included) have spent dozens of hours teaching the new music to the students. Yale School of Music’s Martin Bresnick has finished his piece for NewMusic4us and will be presenting it to the students at the concert.”

The trio will be playing Ben Wallace’s ['14MM] and Gabriel Bolaños’ pieces Sunday.

The Second Movement concert series was founded with the idea of creating a concert format that reflects an arts community that is integrated between performers and students,” said David Perry '13AD, who is producing Second Movement with violist Isabella Mensz '14AD. “The idea is that musicians have a lot to offer their communities, simply by acting as teachers and mentors, and that such work simultaneously enhances our musicianship as performers. For this reason, each concert that we present in the series includes short performances by student groups, who also get about half an hour of coaching from the featured performers before the concert starts.”