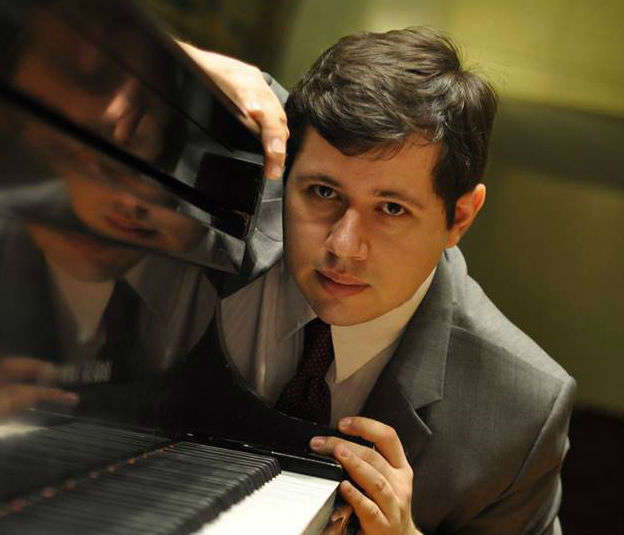 Pianist Rolando Rolim won both the third prize and the Schumann prize at the Géza Anda International Competition. Rolim is a DMA candidate at the Yale School of Muic, where he studies with Boris Berman.

The competition, founded in memory of Hungarian pianist Géza Anda, is held every three years in Zurich.

About Ronaldo Rolim
Brazilian pianist Ronaldo Rolim is the winner of more than 30 awards in competitions around the globe. Recent accolades include top prizes at the Bösendorfer, San Marino, and James Mottram International Piano Competitions. Ronaldo has performed extensively in his native Brazil, as well as in the United States, Mexico, South Korea, Portugal, Spain, United Kingdom, the Netherlands, Switzerland, Italy, and Austria, having played at prestigious venues in four different continents, such as Carnegie Hall (New York), Steinway Hall (London), Theatro Municipal (Rio de Janeiro), and Seoul Arts Center (Korea), among others.

A passionate chamber musician, Ronaldo frequently collaborates with diverse singers and instrumentalists, among them luminaries like Marina Piccinini, Michael Kannen and Maria Lambros. Alongside violinist Lydia Chernicoff and cellist Andrea Casarrubios, he founded Trio Appassionata in 2007, since then developing extensive activities through the United States and abroad. In the Fall of 2014, the ensemble released its first album, gone into night are all the eyes, on Odradek Records, featuring piano trios by American composers.

Ronaldo’s performances have been broadcast on radio in Brazil (Radios MEC and Cultura), the United States (Spokane Public Radio and WBJC Baltimore), and Europe (Radios Rai 3 and France Musique). He has also been featured in several TV programs in his home country, including Brasil Piano Solo, a series of broadcast recitals presented by the TV Cultura Channel of São Paulo. Ronaldo appeared in the documentary Magda Tagliaferro: The World Inside the Piano performing music by Scriabin.

Born in 1986 in Votorantim, Brazil, Ronaldo Rolim started his musical studies with his mother, Miriam Correa, and gave his first public performance at the age of four. In 1998 he was admitted at the Magda Tagliaferro School in São Paulo as a student of Zilda Candida dos Santos and Armando Fava Filho. At the age of eighteen, after winning the Nelson Freire and the Magda Tagliaferro Piano Competitions, he moved to the United States to study with Flavio Varani at Oakland University (Michigan). While there he was awarded Outstanding Student in Piano Performance by Oakland University and by the Mu Phi Epsilon Association, having performed extensively in the Metro Detroit area.

In 2007, Ronaldo moved to Baltimore, where he attended the Peabody Conservatory as a student of Benjamin Pasternack. His accomplishments at Peabody included the Pauline Favin Memorial Award in Piano, first prize at the Harrison Winter Piano Concerto Competition, the Douglas and Hilda Goodwin Scholarship for Chamber Music, and the 2012 Presser Award. In 2014 Ronaldo was one of the very few pianists admitted into the Doctor of Musical Arts program at the Yale School of Music, where he currently studies with Boris Berman.