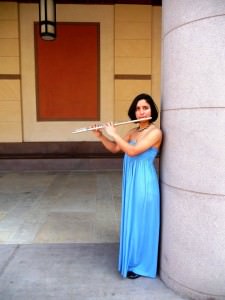 Meera Gudipati '17 MM has won the position of Principal Flute in the New Haven Symphony Orchestra.

Gudipati recently started her studies at the Yale School of Music as a first-year Master of Music student, and is studying with Ransom Wilson. A native of Los Angeles, Calif., she attended the Colburn Community School of Performing Arts, and received a Bachelor of Music degree from the University of Texas at Austin in 2015.

About the New Haven Symphony Orchestra

Now in its 121st year of continuous operation, the New Haven Symphony Orchestra continues to fulfill its mission of increasing the impact and value of orchestral music to a broad array of audiences, and has had a strong relationship with Yale since its establishment. With its resident home at Yale's Woolsley Hall, the orchestra has expanded to included multiple Education and In The Community programs, and is now led by its tenth music director, William Boughton. ABOUT