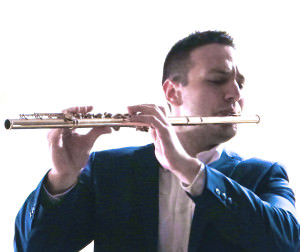 With experience as a soloist throughout the world with concerto appearances in United States, Germany, Italy, France, Brazil, Fridkis has served as guest principal flute with Symphony SONG (Korea), the Princeton Symphony, and the Cleveland Philharmonic, and has appeared with the symphonies of St. Louis and New Haven. He recently performed with Fort Worth in August 2015, and praised by the Star-Telegram as "extraordinary in all three concerts" and "the talk of the town."
Fridkis earned his master’s degree in flute performance from the Yale School of Music in 2014 and is currently pursuing an Artist Diploma at Yale, studying with Ransom Wilson. He is a member of the New York based new music ensemble Le Train Bleu, led by Ransom Wilson. Jacob previously studied at The Cleveland Institute of Music, where he was awarded a Presidential Merit Scholarship as a student of Joshua Smith.
A winner of Yale School of Music’s 2013 Chamber Music Society competition, Jake’s other recent highlights include being named an artist in residence at the Banff Music Centre, flute fellowship at the American Academy of Conducting at Aspen two summers in a row, studying with Mark Sparks; and performances at Carnegie Hall and Avery Fisher Hall in New York and Powell Hall with the St. Louis Symphony. Jake made his NFA convention debut at age 15 premiering Gary Schocker’s flute duet “French Toast” with his brother Gabe and the composer on piano.