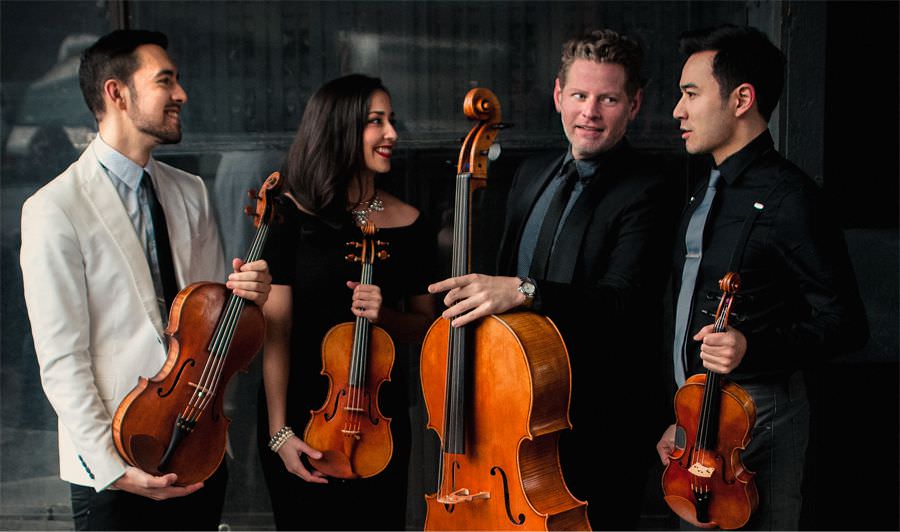 The Catalyst Quartet announced in January that Suliman Tekalli '16 AD has been named the newest member of the ensemble. He replaces Jessie Montgomery, who left to devote her time to composing.

Tekalli will rotate first and second violin parts with Karla Donehew-Perez. Winner of the 2015 Seoul International Music Competition, he brings a wealth of solo and chamber music experience to the quartet. The Catalyst Quartet will be performing at the 19th Annual Sphinx Competition for Black and Latino string players this week in Detroit. The competition coincides with SphinxCon: Ignite to Action, a conference on diversity in the arts February 5–7. Sessions will be streamed live starting Friday at 3 pm.

The Catalyst Quartet also appears in February at Jazz at Lincoln Center with vocalist Cécile McLorin Salvant, and will be the quartet in residence at the Vail International Dance Festival this summer.

His performing career began early with his radio debut on NPR’s From the Top in 2000, playing alongside violinist Mark O’Connor, and his subsequent debut with the Orlando Philharmonic, performing the Sibelius Violin Concerto at the age of sixteen. Mr. Tekalli went on to attend the Juilliard School, Cleveland Institute of Music, Yale School of Music, and the Schwob School of Music, studying with Hyo Kang, Sergiu Schwartz, and Joel Smirnoff. As a chamber musician, Mr. Tekalli has appeared extensively in festivals including Music@Menlo, Yellow Barn Festival, and the summer chamber festival at Banff Centre. He has collaborated and performed side by side with eminent musicians such as violinists Gil Shaham, Cho Liang Lin, Aiman Mussakhajayeva, and Donald Weilerstein, cellist Paul Watkins of the Emerson Quartet, and clarinetist David Shifrin, among others. Mr. Tekalli also extensively concertizes as part of the Tekalli Duo, formed with his sibling pianist Jamila Tekalli, and the Goliath Duo formed in 2013 with contrabassist Samuel Suggs.

Suliman Tekalli actively transcribes and arranges music for the violin, piano, and mixed ensembles as well as composes original works and cadenzas for the standard violin concerto repertoire. In 2013 he received from the Cleveland Institute of Music the Maurice and Judith Kaplow Prize for Uncommon Creativity, and he has arranged for ensembles such as the International Sejong Soloists. He gave the world premiere of his composition Mephistoccata from his solo violin suite at the Montreal International Music Competition in 2013.

In addition to performances with the Catalyst Quartet, Tekalli’s 2016 spring season includes solo performances in Korea, and chamber concerts and recitals across the United States from Carnegie Hall, to Chicago’s Preston Bradley Hall as well as a winter residency Music@Menlo in California.