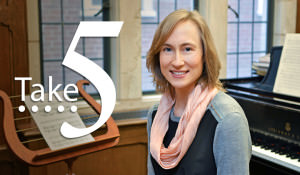 Take 5 offers a brief introduction to Yale faculty members in a Q&A format. The featured faculty member selects 5 out of 10 questions to answer. Any opinions shared are not necessarily those of YaleNews.

Hannah Lash, a member of the School of Music faculty since 2013, is a composer of chamber, choral, orchestral, vocal, and solo works, which have been performed throughout the country and abroad. Her music has been commissioned by the Boston and Alabama symphony orchestras, Carnegie Hall, the American Composers Orchestra, the Los Angeles Chamber Orchestra, the Great Lakes Chamber Music Festival, and the Aspen Music Festival and School, among many others, and have won her numerous awards and fellowships.

Closer to home, Lash’s work has been debuted by Yale Choral Artists and by the New Haven Symphony Orchestra, which last fall premiered the first installment of “The Voynich Symphony,” an ongoing collaboration that the orchestra will introduce in four parts in concerts over two seasons. Lash’s inspiration for the piece is the Voynich manuscript, an illustrated codex in an unknown writing system housed at the Beinecke Rare Book and Manuscript Library that has long been a mystery to scholars and cryptographers worldwide. Lash has also written — and performed — music for harp, an often-overlooked instrument in the contemporary music canon. (See the video below.) On Feb. 9, three new works will be premiered on campus as part of the Faculty Artist Series: “Hero and Leander,” a wind quintet; “Sonata for Violin and Piano; and “Four Songs,” which will feature the composer on harp. The free concert will take place at 7:30 p.m. in Morse Recital Hall of Sprague Memorial Hall, 470 College St.

What scholarly/research project are you working on now?

For me, my work is generally creative more than scholarly, so I'll answer in terms of big projects I am working on now as a composer/performer. I'm currently working on my second harp concerto, which I'll premiere in Colorado this summer. I premiered my first one last October at Carnegie Hall. The experience was quite meaningful for me; there is a very small body of repertoire for the harp and I am glad to be able to expand it.

I'm also working on a Requiem for chorus with chamber orchestra, written for my colleague Jeffrey Douma who conducts the Yale Choral Artists. The interesting thing about this project is that I have no particular connection  to the traditional Requiem text, so I found myself needing to rewrite it in such a way that it could feel more personal and more approachable for me.

The third project that's open on my desk is a large four-movement symphony which the New Haven Symphony commissioned. The interesting thing about this one is that the orchestra is premiering each movement serially season by season, so I've had the premiere of the first movement now, and just completed the composition of movement 2, which will be performed in May in Woolsey Hall. The piece uses as a point of inspiration the Voynich manuscript, with each movement title reflecting a separate section of the manuscript.

What important lesson(s) have you learned from your students?

It's actually very hard to pick one or even a few things in this respect; I learn all the time from my students! But one rather striking lesson I remember feeling I had learned from teaching composition one-on-one is the idea of asking a student questions in greater proportion than offering my own perspective. This is not always the best approach, but in my particular area, the task of the teacher is to help the student composer find and realize his or her own music. To do this, one has to be alert to the student's very particular musical sensibilities. Often I find students come upon their own solutions if asked the right questions.