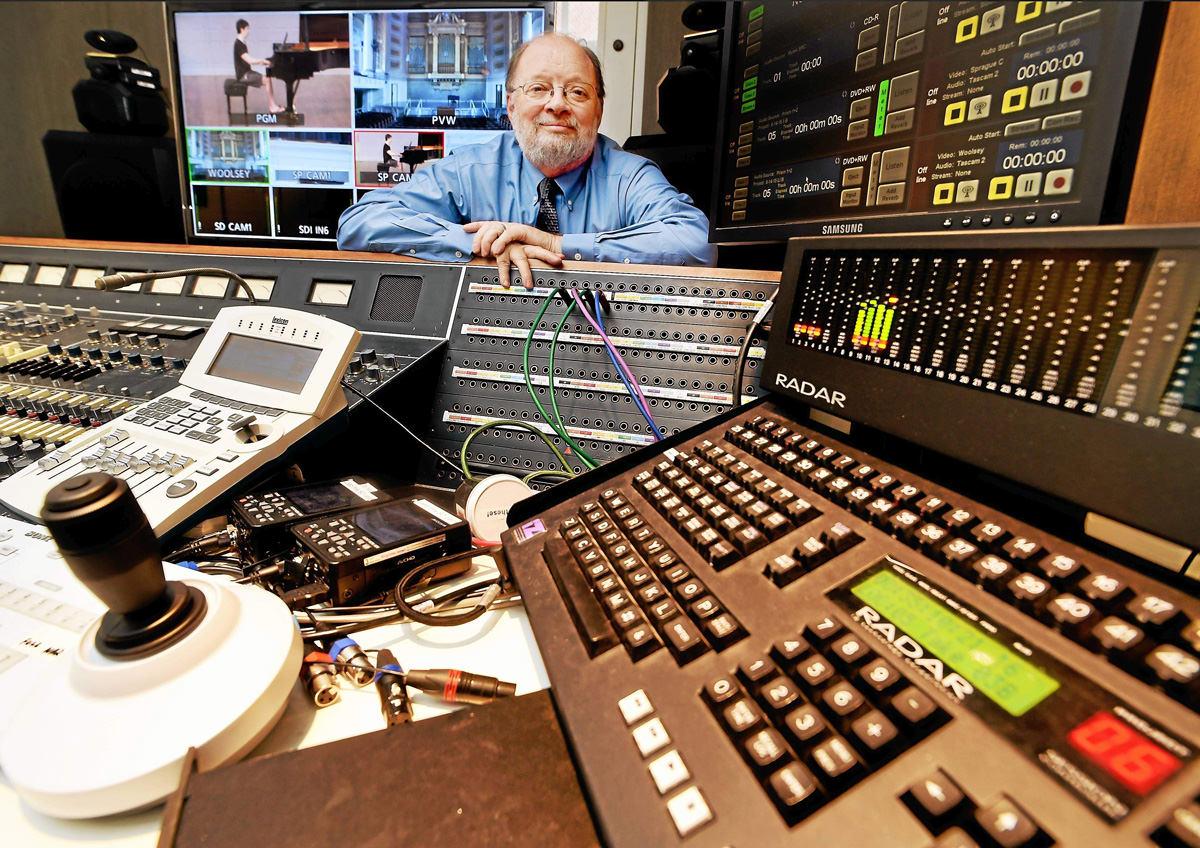 “Stand by.” Eugene Kimball’s voice booms from the talkback speaker hanging from the ceiling of Sprague Hall. A Yale student waits, instrument in hand, while the blue-line bus rumbles as it takes off from its stop at College and Wall. Silence returns to the hall. “Take five.” The session resumes. While the performer plays their Mozart concerto, trying to remember what their teacher said in the studio, the machines record, and Gene listens.

Gene knew what he was listening for; it wasn’t just wrong notes or rhythms. Some call it “the sound.” Perhaps it was something learned from his mentor and predecessor, Fred Plaut. Maybe it was from his time working the soundboard at Yale School of Drama, where he studied. Or perhaps it was something he developed over his 45 years working at the School of Music. Though “the sound” is something intangible, Gene had it. More importantly, he knew how to teach someone to achieve it.

Behind the scenes in the Fred Plaut Recording Studio, Gene’s small army of assistants is a mix of undergraduates, from freshmen to seniors, and eager graduate students from YSM. There are many steps to making a recording, though much of the process is waiting around for the next thing to happen. Gene would always be available to impart knowledge to anyone that took the time to listen.

Gene shared his knowledge not only with his assistants, but also with those who took his class in sound recording. He taught lessons on microphone types and their placement, acoustics, reverb, and sound editing, just to name a few topics. All his students would conduct their own recording sessions and create their own recordings, a vital skill for today’s musicians.

For me, working with Gene in the recording studio acted as the continuation of Joan Panetti’s Hearing class. He taught how to listen not only to the music, but also to the quality of the sound, the timing, the silences, and most importantly, the sound that the room makes. Without the visual element of performance, all aspects of the sound and space come alive.

Many will remember Gene for his detailed stories: life lessons, musical tidbits, and tales from YSM’s past. His gift of storytelling played an important role in his job: he called it “artist liaison skills.” During session breaks and concert intermissions, he could read the mood of the performer and tell a story of encouragement, a joke, give a few acoustic pointers, or say nothing at all. He offered whatever would help the performance.

The most lasting effect Gene had on the YSM is his recordings. Gene never missed a Yale Philharmonia concert. Even though he could not be at every degree recital and Yale performance, he personally designed the YSM’s recording setup. He even had input into the 2003 renovation of Sprague Hall and helped shape the acoustics of Morse Recital Hall. The most important rule Gene taught his assistants was to record the performances accurately, without making the listener aware of the recording engineer. Every YSM recording has been touched by Gene. He is in the microphones, in the hall, in the sounds, and in the silences.

The next time you listen to a Yale recording, just remember: Gene is listening right along with you.