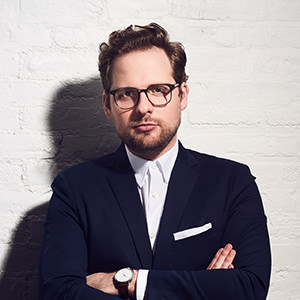 James Schamus' film Indignation, which is based on Philip Roth's 2008 novel of the same name, opens tomorrow in theaters across the United States. The film's score was composed by Jay Wadley '07MM '08AD, who studied at the Yale School of Music with Martin Bresnick, Aaron Jay Kernis, and Ezra Laderman. "He wanted something that was very classical," Wadley said of Schamus' direction, "and he knew that was my background."

Reached by phone at his New York City-based composer collective/production company Found Objects, which he and fellow Yale School of Music alumnus Trevor Gureckis '07MM started during graduate school in New Haven, Wadley said he first worked with Schamus when the latter directed "That Film About Money" and "The Second Part of That Film About Money," two short documentaries released in 2014 as part of Morgan Spurlock's We the Economy series. When they first met, Wadley said, he and Schamus talked about classical music and about Wadley's experiences helping to orchestrate Rufus Wainwright's opera Prima Donna and his song cycle All Days Are Nights: Songs for Lulu.

Talking about Indignation, Wadley said, "This by far is going to be the most public and wide-releasing film that I've every worked on." He described the composition process as "one of the most challenging things I've ever done." The music for Indignation is scored for string orchestra and solo piano (Conor Hanick), violin (Tim Fain), and cello (Clarice Jensen). The film also includes "Is It Love," a 1950s-style ballad with lyrics by Schamus that features vocalist Jane Monheit and a 30-piece ensemble. The movie is set in the early 1950s.

The inclusion of the love song was rather serendipitous, Wadley said, explaining that when he enrolled at Oklahoma City University as an undergraduate, he pursued a double-major in composition and vocal performance. The latter eventually became his minor. "One of the things that I love to sing more than anything else is the American Songbook," he said.

Reflecting on his studies at the Yale School of Music and how they prepared him for what he's doing now, Wadley said, "Ultimately, I think it was a great process for me to learn how to write music that can stand on its own first."

Wadley has composed music for television and film and has received both the Charles Ives Scholarship and the Charles Ives Fellowship from the American Academy of Arts and Letters and an ASCAP/SCI Student Composer Award. He has received commissions from Carnegie Hall's Ensemble ACJW and arranged or orchestrated music for Wainwright, Calexico, and Mark Ronson that has been performed by such acclaimed ensembles as the San Francisco Symphony, Louisville Symphony Orchestra, New York City Opera, and The Royal Ballet.