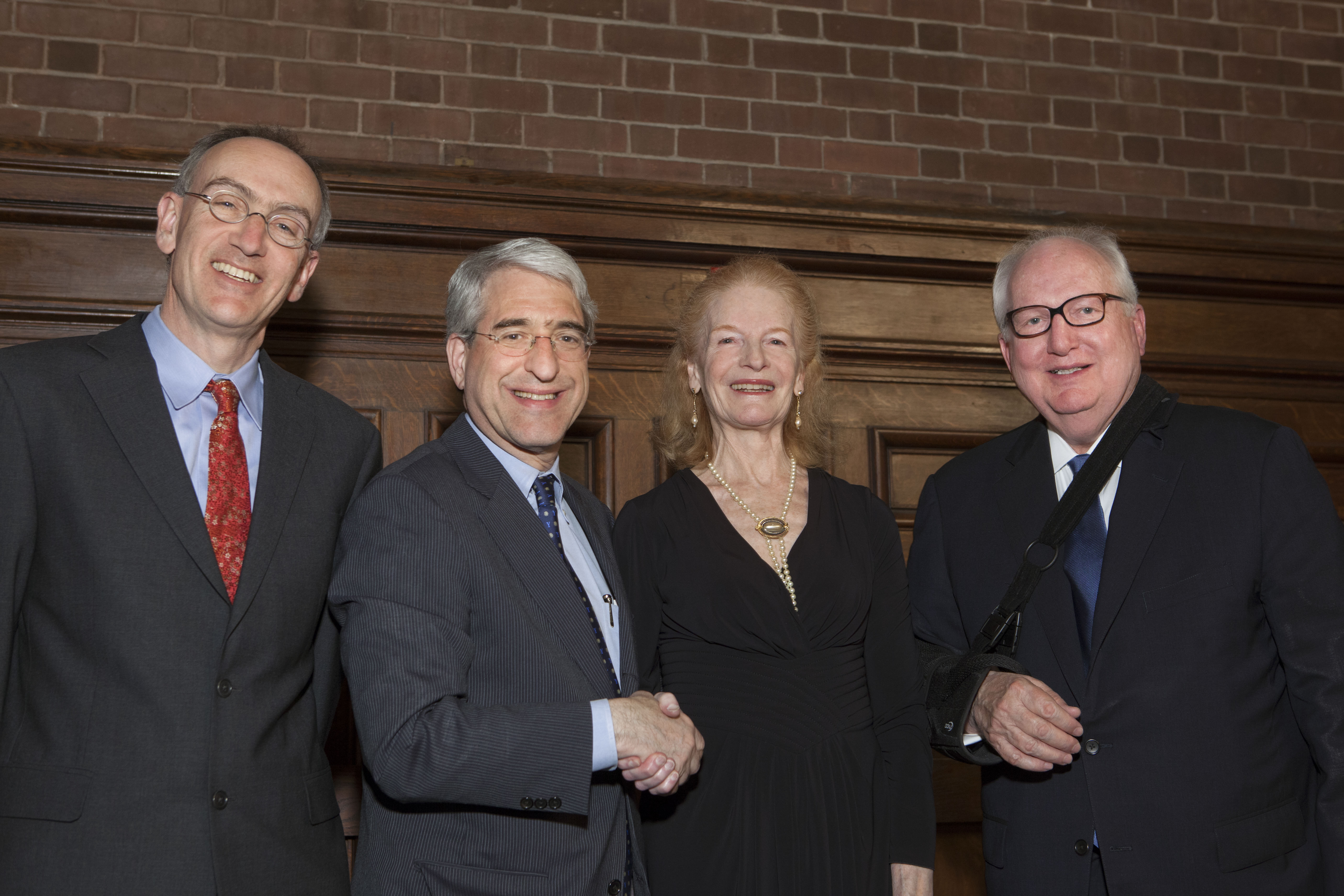 The Yale School of Music held its annual Honors Dinner on Sunday, May 7, welcoming students and alumni, faculty and staff, and distinguished guests to the Yale Commons for an evening of celebration. 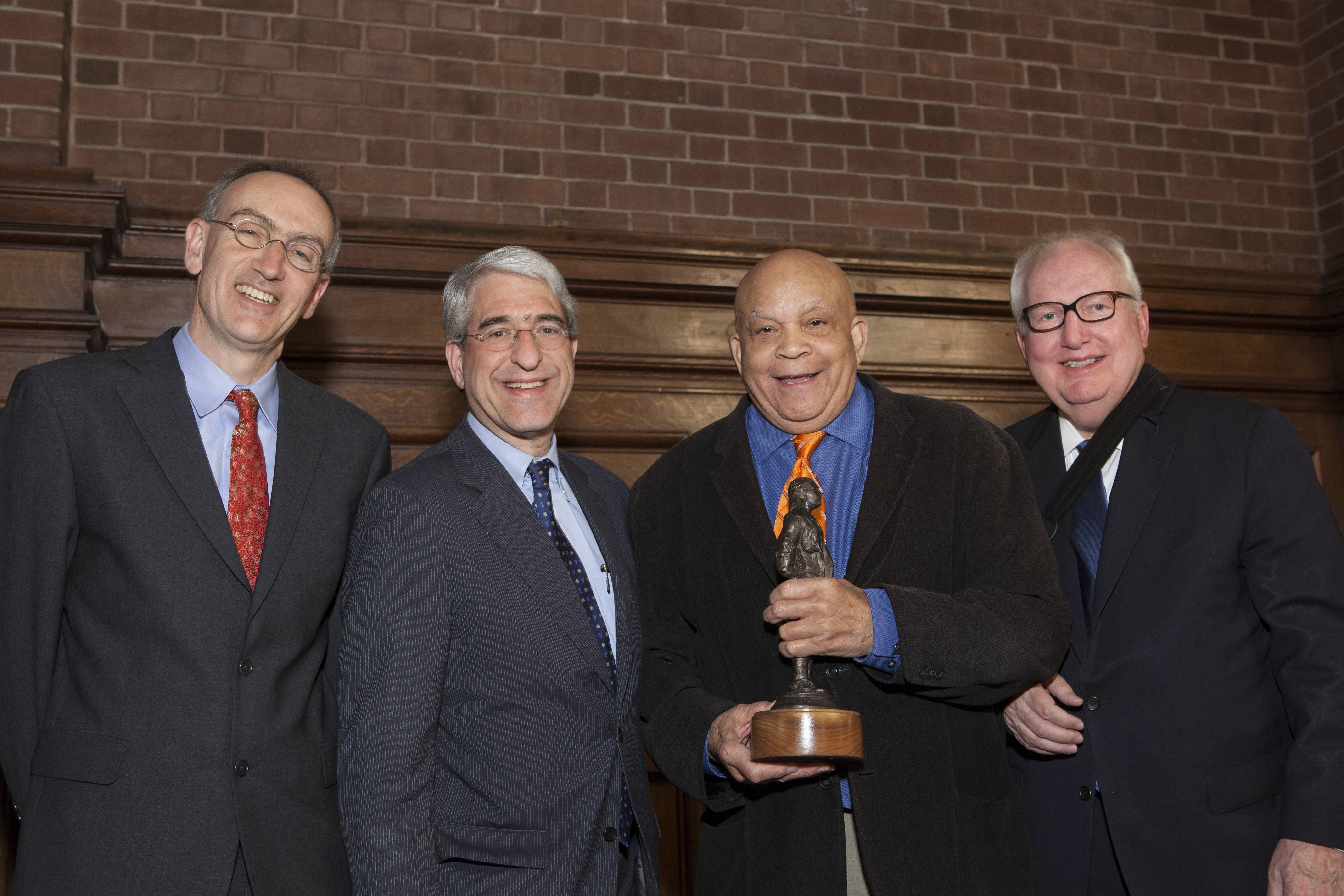 Dean Blocker, with University President Peter Salovey and Yale Provost Benjamin Polak at his side, presented longtime YSM professor Willie Ruff '53BM '54MM, who will retire at the end of the semester, with the University's prestigious Nathan Hale Award. "He's changed all our lives," Blocker said, before attendees were shown a video tribute to Ruff's life and work. In a nod to the man who indirectly inspired him decades ago to study at YSM, Ruff said, "I thank, most of all, Charlie Parker." The jazz office in the Yale School of Music's Adams Center for Musical Arts was recently named in Ruff's honor.

Blocker presented the Ian Mininberg Distinguished Service Award to pianist Warren Lee '00MM and the Cultural Leadership Citation to retiring Yale Collection of Musical Instruments curator William Nicholas Renouf '71MMA. The Collection's director, William Purvis, accepted the Citation on behalf of Renouf, who was unable to attend the Honors Dinner. Before presenting student prizes, Blocker referenced an impressive number of awards and successes earned and realized this year by students, faculty, and staff. He recognized longtime YSM faculty pianist Peter Frankl, who plans to retire in the fall, for his dedication to the School community.

At the end of the evening, Blocker told the students in attendance, "Claim the future. It belongs to you. You will make us better." What follows is a list of the student prizes awarded during YSM's 2017 Honors Dinner.

The Thomas Daniel Nyfenger Memorial Prize, which is awarded to a graduating student who has demonstrated the highest standard of excellence in woodwind playing, was presented to clarinetist Jesse McCandless.

The John Swallow Prize, which is given to an outstanding brass player whose artistry and dedication have contributed to the department, was awarded to horn player Reese Farnell.

The Woods Chandler Memorial Prize, for the best composition in a larger form written during the year, was awarded to Hilary Purrington.

The Rena Greenwald Memorial Prize, for the best piano composition written during the year, went to Ethan Braun.

The John Day Jackson Prize, for an outstanding chamber music composition written for strings, with or without other instruments, was presented to Natalie Dietterich.

The Frances E. Osborne Kellogg Memorial Prize, for the best composition written in a contrapuntal style, was given to Matthew Bridgham.

And the Ezra Laderman Prize, for the best composition written for musical theater or voice, was awarded to Molly Joyce.

The Eliot Fisk Prize, which is given to an outstanding guitarist whose artistic achievement and dedication have contributed greatly to the department, was awarded to Christopher Garwood.

The Charles Ives Prize, which is awarded to an outstanding organ major, went to Gabriel Benton.

The Julia R. Sherman Memorial Prize for excellence in organ playing was awarded to Nicholas Quardokus.

The Charles S. Miller Prize, which is given to a gifted pianist who has done outstanding work during the first year of study, was awarded to Nansong Huang.

The Elizabeth Parisot Prize, which goes to outstanding pianists in the School of Music, was awarded to Fantee Jones and Chengcheng Yao. 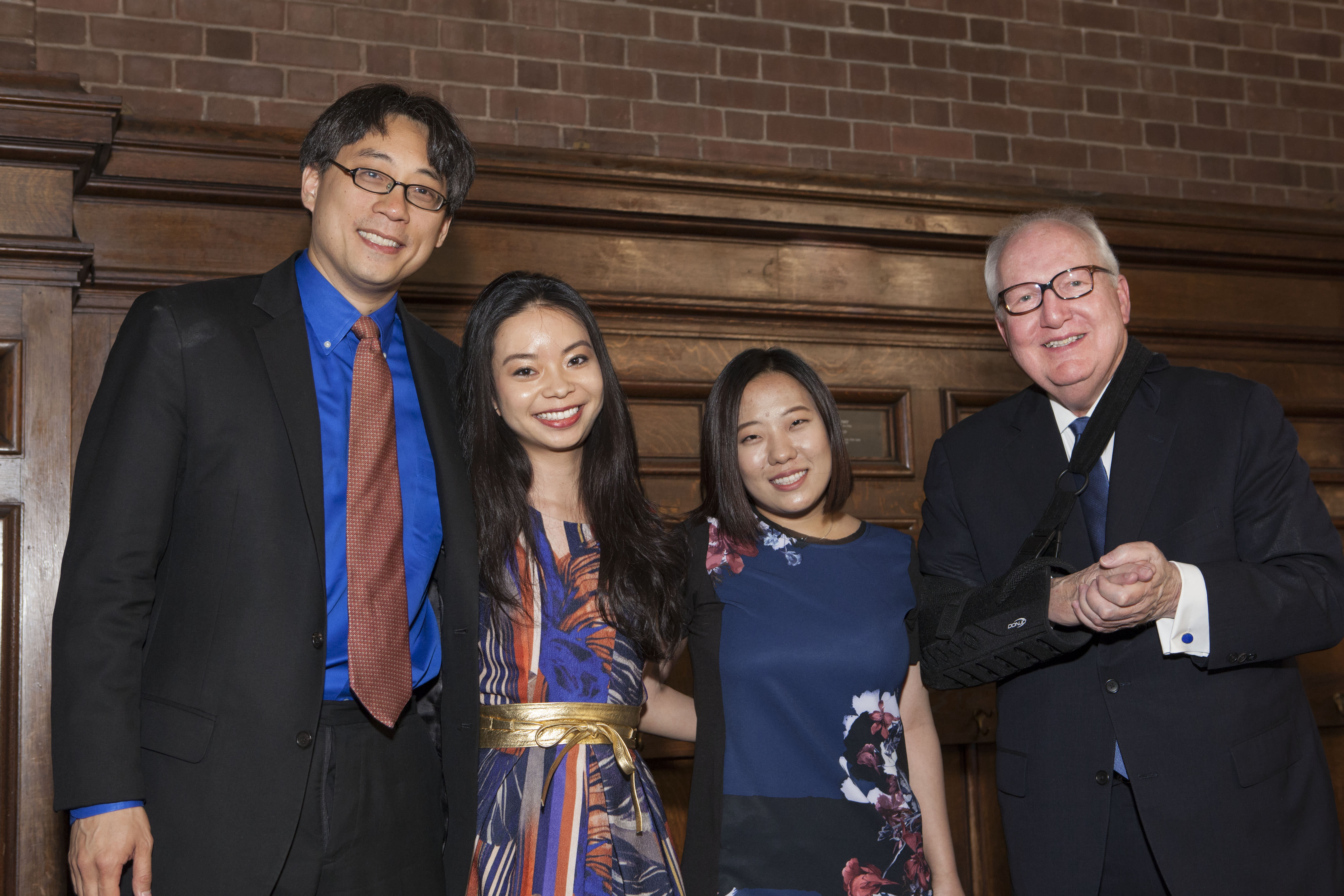 The Georgina Lucy Grosvenor Memorial Prize, which is awarded to the violist in the graduating class whose performances while at Yale have exhibited the highest potential for success as a soloist or chamber musician in the field, was given to Emily Brandenburg.

The Aldo Parisot Prize, which is awarded to gifted cellists who show promise for a concert career, was presented to Mingyao Zhao and Allan Hon.

And the Broadus Erle Prize, which is given to outstanding violinists in the School of Music, went to Laura Park, Sirena Huang, and Jiwon Sun.

The David L. Kasdon Memorial Prize, which is awarded to an outstanding singer in the School of Music, went to soprano Jessica Pray.

The Phyllis Curtin Career Entry Prize, whose purpose is to assist in launching the career of a graduating voice student who demonstrates exceptional talent as an artist and promise for a professional career, was given to tenor Andres Moreno Garcia.

The Friedmann Thesis Prize, which is awarded to a DMA candidate whose thesis is notable for its distinguished research, original perspective, in-depth engagement with its subject, and well-crafted presentation, was presented to choral conductor Nathan Reiff. 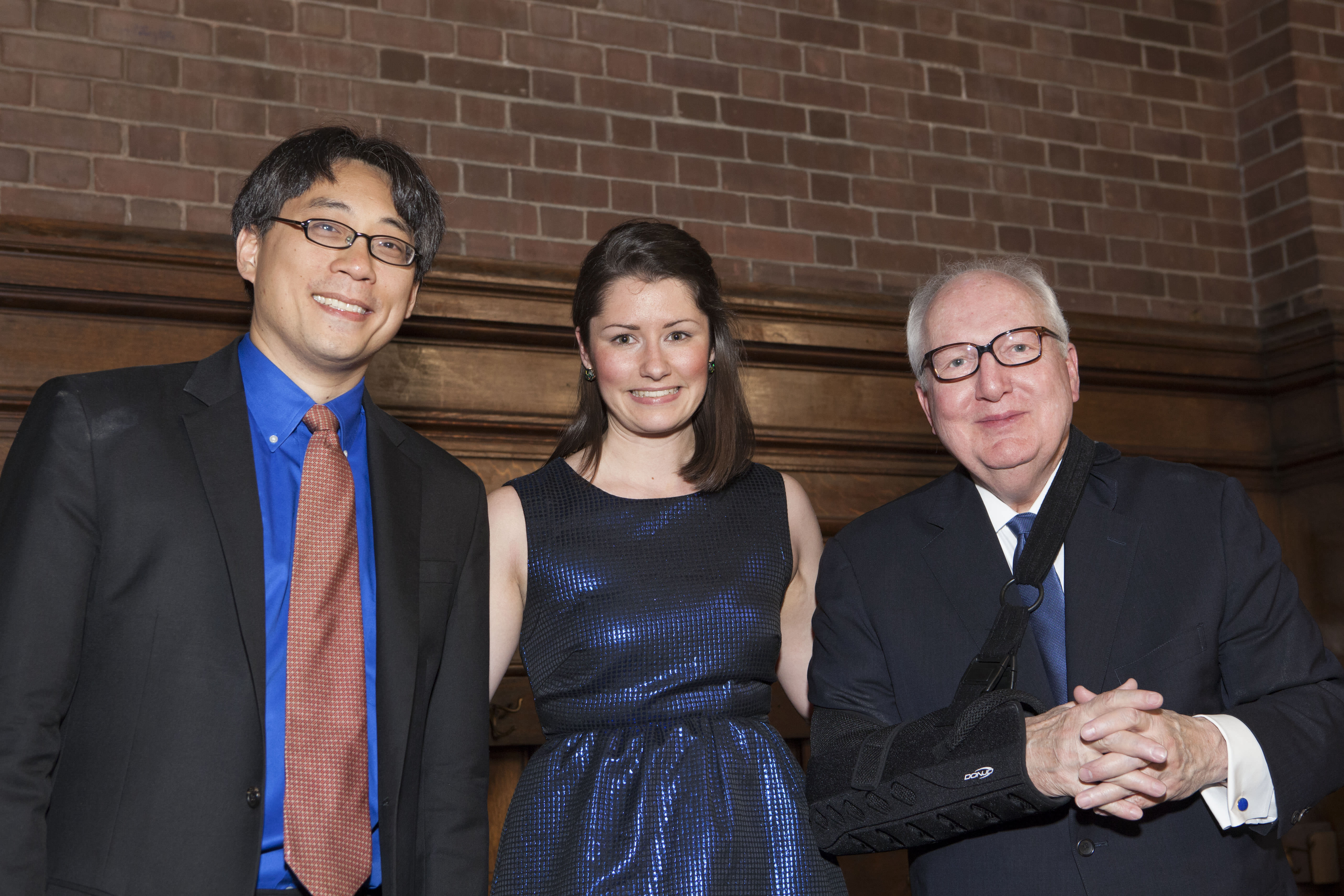 The Malcolm L. Mitchell and Donald M. Roberts, Class of 1957 Prize, which is given to the outstanding graduating teaching artist in the Music in Schools Initiative, went to trumpeter Andrew Stadler.

The Philip Francis Nelson Prize, which is awarded to a graduating student whose musicianship is outstanding and who demonstrates curiosity, talent, and the entrepreneurial spirit in the many dimensions of the music profession, was given to oboist Lydia Consilvio.

The Presser Foundation Music Award, which is awarded to an outstanding returning student to advance his or her music education, was given to violist Florrie Marshall. 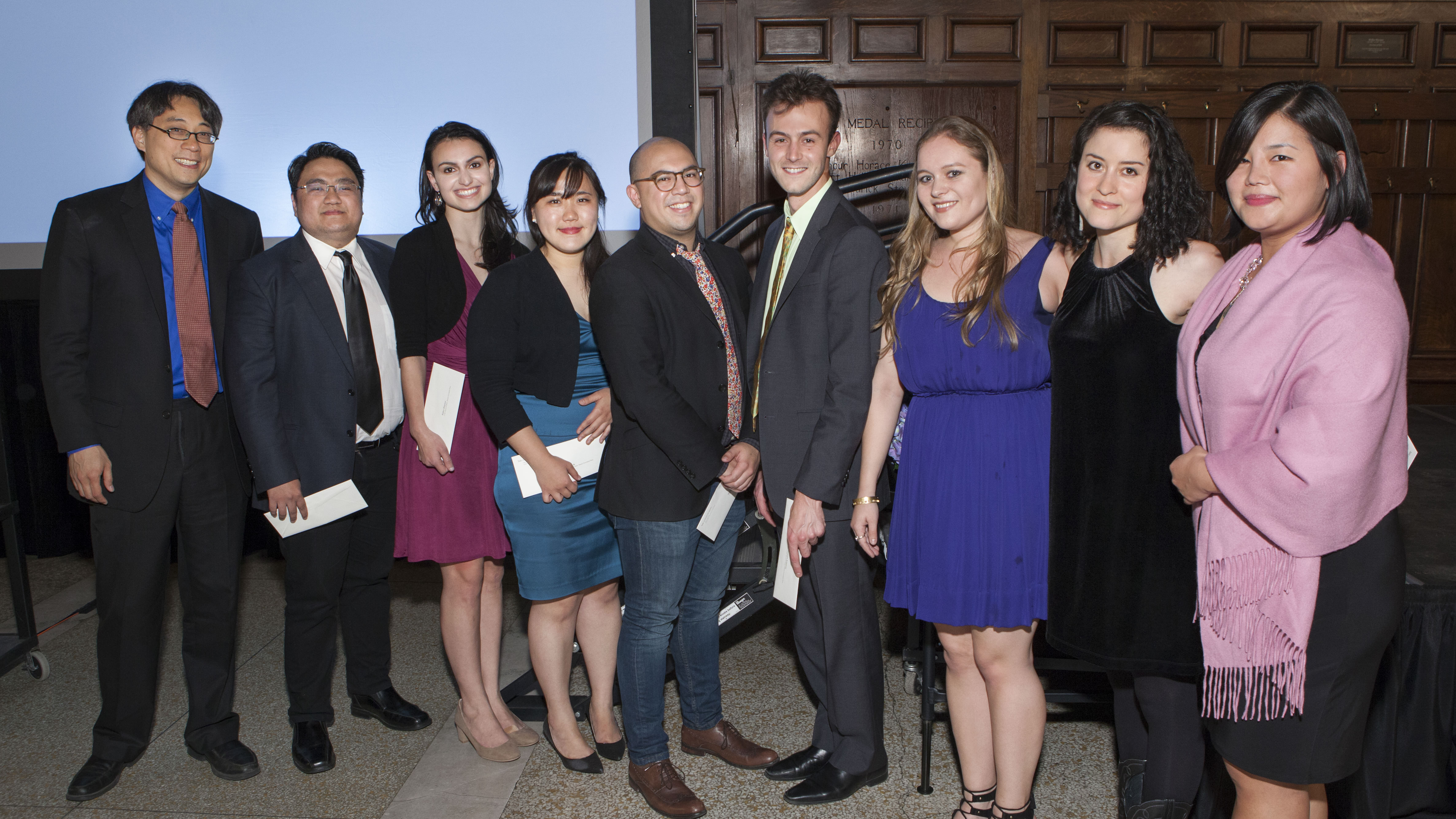 And the Yale School of Music Alumni Association Prize, which is awarded to graduating students who have not only excelled in their respective fields but have also made important contributions to the general life of the School, was given to choral conductor Matthew Cramer, flutist Felice Doynov, clarinetist Graeme Johnson, violinist Sophia Mockler, pianist Sun-A Park, composer Hilary Purrington, and violinist Diomedes Saraza.