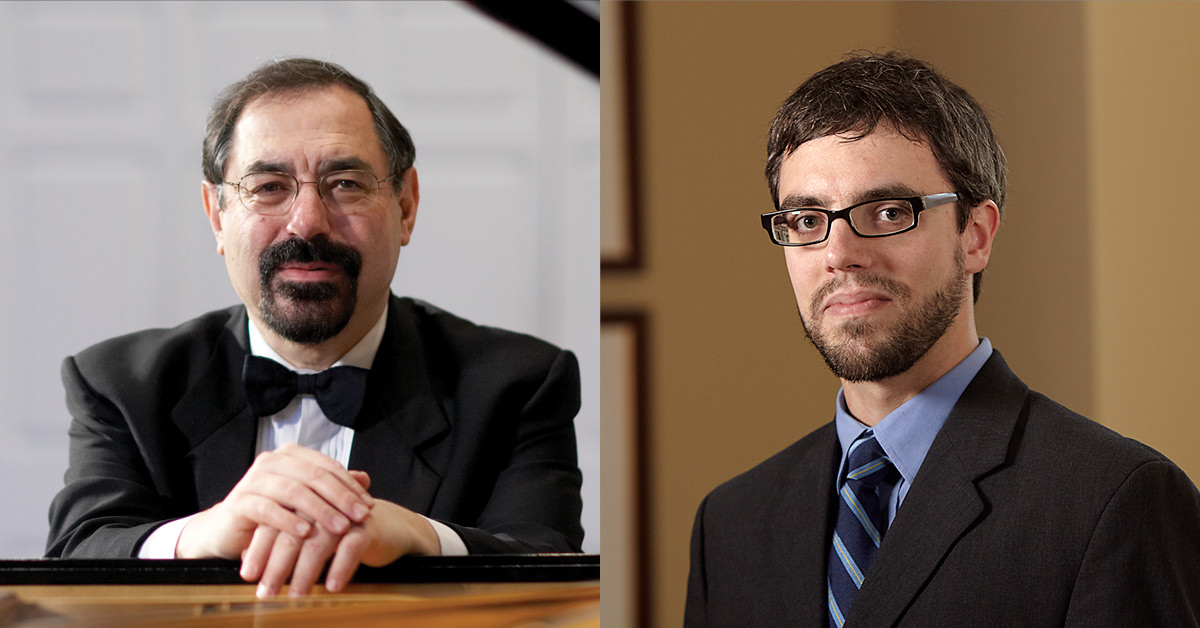 School of Music faculty pianist Boris Berman kicks off the 2017-2018 Horowitz Piano Series on Wednesday, Sept. 27, with an all-Brahms program featuring the composer's late piano works, Opp. 116-119. We spoke with YSM Associate Professor of Music History Paul Berry, the author of Brahms Among Friends: Listening, Performance, and the Rhetoric of Allusion (Oxford University Press, 2014), about the works that Professor Berman will perform, what the music tells us about the composer and his environment, and what the late piano works demand of a performer.

Q: Brahms’ piano pieces, Opp. 116-119, were composed during the last decade of his life. What does that lateness mean in terms of the character of these pieces, and in the context of his career and his personal life? According to our program notes, Lionel Salter said, of Op. 116, “It is as if the composer at the end of his life had compressed the essence of his musical and emotional thoughts into these miniatures.” And Brahms himself described the Op. 117 set as “lullabies of my sorrow.” What, if anything, did Brahms’ friend Clara Schumann say about these pieces?

A: Well, the idea of lateness can inform our hearing of these piano pieces in several productive ways. The most obvious is their placement in the composer’s output. In the early 1890s, Brahms was not yet 60, and all his friends constantly commented on his fitness and robust health; he had no idea that this would turn out to be his last decade. But he did know that he would soon retire from public life as a composer. Indeed, he had already retired once, only to return to composition when he encountered the clarinet playing of Richard Muehlfeld. The late piano miniatures are the most abundant fruit of what he planned to be his final harvest. Especially with the example of late Beethoven in the ears of the musical public, a composer would naturally understand that his final works were likely to be interpreted as summations of his craft and emotional range, and compose them with the judgment of posterity in mind. Certainly Brahms did so with these piano pieces. At the same time, the late piano pieces first surfaced not in published form, but in manuscript copies made for Clara Schumann, one of the great pianists and musicians of the century and Brahms’ oldest and firmest friend. Throughout the summers of 1892 and 1893, he sent her packages containing individual miniatures, some of which were so dramatic in effect that she took them to be the building blocks of a larger piano sonata (a genre Brahms had avoided since his youth). Though she had retired from the concert stage by now, these pieces soon became a dominant focus of her private music-making. In fact, we have accounts from her daughters and grandchildren concerning her renditions of them and, in some cases, the poetic significance she attached to them (Op. 118, No. 5, for instance, seemed to her to represent the emotional landscape of an elderly couple reminiscing about their lives together while their grandchildren play nearby). So from both a professional and a personal standpoint, Brahms’ late works lend themselves to interpretation as late works.

Q: In what historical and political contexts were these pieces composed, and how did Brahms’ immediate environment and the changing world around him inform the music he composed toward the end of his life? What do the pieces of Opp. 116-119 tells us about where composition had been and where it was headed?

A: Brahms’ political environment was challenging for him and his fellow liberals, who found their longstanding commitment to education, religious tolerance, and upper-middle-class values under assault from populist and overtly religious parties, whose members preferred the more direct musical styles of composers like Wagner or Bruckner. Brahms’ primary musical market was under attack, and these pieces can be understood as speaking to the alternately nostalgic and grumpy impulses of a soon-to-be minority party. Those elements of this music that seem to us now the most forward-looking (daring modulations, hazy tonality, complex interweaving of multiple melodies) may actually have been designed to summon up appreciation for the learned elements of a craft that many already perceived to be outdated and in decline.

Q: Talk if you would about the form, structure, and styles of these pieces and how Brahms might’ve intended them to be performed and presented.

A: Most of these pieces present some variant of ternary, or three-part, form, in which the main material is presented at the beginning, cedes its place to contrasting material in the middle, and then returns to close the work near the end. Brahms’ craft emerges in the seemingly infinite variety of approaches that this ancient musical form elicits from him in each individual context, from the straightforward, almost folk-like simplicity of Op. 118, No. 5, to the complex twists and turns of Op. 117, No. 2. It’s always worth listening for moments of return, when familiar material reappears, and comparing them to one’s memory of that material from earlier in the piece; so many of these works create subtle but remarkable transformations in mood when one encounters the same material in new contexts. Although these pieces are rightly seen as intimate, private ruminations, this is also virtuosic music, though it usually wears its virtuosity in an understated way. Most of the pieces were premiered in public by the best pianists then performing, and reviewers consistently noted the difficulties that they posed to a pianist’s technique, especially in the faster pieces. The final work on the recital, Op. 119, No. 4, is a good example, with its whirl of gypsy-style rhythms. But the slower works, too, present real technical challenges involving the thickening of texture, and these challenges are often aligned with pivotal moments in the unfolding of the piece: the return of familiar material after a long absence, for instance, is often much harder to play than the initial presentation of the tune. Even the famous lullaby, Op. 117, No. 1, is almost overwhelmed near the end when its fragile voices multiply under the pianist’s hands.

Q: What should audiences listen for in these works as they think about Brahms and his world and the culture in which we live today?

A: Some elements of our current political scene (the rise of populist ideologies in the United States and abroad, increasingly overt intolerance and suspicion of “elite” attitudes, a pervasive sense of loss and frustration) mirror aspects of Brahms’ own environment in the 1890s. The variety of moods explored in these short piano pieces, from resignation and nostalgia to brooding anger and firm resilience, therefore resonate productively in the present moment.

Q: What, in your opinion, does Professor Berman bring to these works? And what do these pieces require of a pianist, both technically and with regard to scholarship?

A: These works require of a pianist a deep immersion in the intricacies of the composer’s craft and a deep commitment to the emotional world projected in each piece. Professor Berman brings both immersion and commitment to his playing. He also brings a firm sense of clarity with respect to large-scale structure. He does not “lose” his listeners, but guides them through the unfolding of each piece.