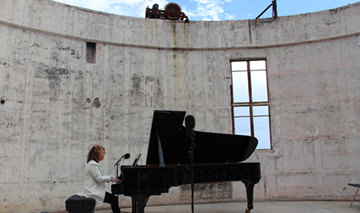 Some musicians rely on the past to create their musical futures. Pianist Lisa Moore, faculty with the Festival's New Music Workshop, focuses on the here and now, with maybe a bit of the future thrown in for good measure.

A new music specialist, Moore makes her musical living jumping into sounds and musical spaces that many other musicians avoid like the key of F Major. That interest began when she was still a undergraduate student. “I was drawn to the scene,” she says, “and the idea of laying down a tradition yourself, of having pieces written for you.”

Focusing on new music opportunities was also touched with a bit of realism, Moore says. “I would love to play Schumann every other week in the Concertegebouw but I could bang on a million doors [and not get results],” she says, adding wryly, “After all I didn’t come first in [the] Tchaikovsky competition.”

In contrast, new music has opened lots of doors, she says. Moore spent 16 years with Bang on a Can and regularly garners reviews like this one from Pitchfork: “She’s the best kind of contemporary classical musician, one so fearsomely game that she inspires composers to offer her their most wildly unplayable ideas”.

Playing new music has also meant thinking outside the concert hall box. Moore has played in an airport in Holland, in lobbies and on a boat in Germany. “You never know where it’s going to lead when you’re in [the] contemporary field,” she says.

This is not to say Moore, who is part of the New Music Workshop at Norfolk, avoids anything before the 21st century. “I do a mix of old and new,” she says, noting this coming year’s performance schedule, for instance, includes playing a rendition of the Bach Goldberg Variations arranged for two pianos. “There isn’t that much difference between playing old and new music,” she says. “Most classical musicians are too frightened to try playing contemporary music. They want to remain with the familiar. Management wants them to remain with the familiar. It’s a safe place.

“But the playing still has the keys and you’re trying to make beautiful sounds, sometimes ferocious sounds,” Moore continues. “You have to count. In older traditional music you don’t need to as much. It’s all very symmetrical. You don’t have to learn complex rhythms or work with negotiating with composers on editing and figuring out the boundaries.”

Working with evolving music is one reason Moore loves returning to Norfolk (this is her 13th summer). “It’s a wonderful opportunity to have a real workshop,” she says. “The composers write pieces for us and we pull them to bits. It’s really part of everything I’ve been doing for years.”

Moore grew up in Australia where playing an instrument was a given in her family. She started on violin and piano when she was six, playing in youth orchestras. It wasn’t until she was 12, however, that, encouraged by a teacher, she began thinking about music as a focus her attention. (She had been thinking of becoming an actress.) “Of all the things I do, I probably play piano better than those other things,” she says. “So I decided to audition for conservatories. That’s how it started.”

For musicians considering making the leap to new music, Moore offers this advice: “You just have to dive in. Write to a composer friend and ask him or her to write you a piece. Put yourself forward. There’s always a new music ensemble at most institutions.”

Finally, don’t be afraid of the counting, she says. “Counting was always the thing that put me off when I was a kid. When I was at the Sydney Conservatorium, I was flattered to be asked to play but scared of counting,” she recalls. “People think musicians good at math but we’re not. We only count to four, maybe five.”