Each year, Yale Opera presents two programs of scenes from beloved and important works. Parts are assigned at the beginning of the academic year, giving singers relatively little time to learn, memorize, and inhabit their roles—sometimes more than one and in different languages. We spoke with soprano Leah Brzyski '19MM about her preparation for this year's programs and about developing as a singer and performer here at YSM.

Q: What roles will you be performing in this year's Fall Scenes program, and what has the preparation experience been like?

A: This year I could not be more excited for our scenes production because I have the opportunity to perform two of my dream roles: Blonde from Mozart's Die Entführung aus dem Serail and Ophelia from Ambroise Thomas' Hamlet. While the characters are quite different, each has such a strong willfulness and passion about them that makes digging into their music so appealing. The preparation for my roles this year has been really rejuvenating. After being gone all summer, coming back to dive headfirst into these powerful pieces has been such a driving force behind the semester. Now that memorized runs are done, we're into our staging period, which is my favorite! We finally get to explore not just how [the characters] speak and sing, but how their bodies would react to a situation or another person. Not to mention our Stage Director, Chris Murrah, is one of the most artistically genius people I have ever met. He is full of unique insights and always allows us the freedom to explore and play rather than micromanaging every action we do on stage.

Q: What is the benefit and what are the challenges of having to learn multiple roles, in different styles and in different languages, in a short amount of time?

A: Every year we are assigned our roles and are given three weeks to learn and memorize all of our music. At the end of the three weeks we perform a memorized run for the voice faculty so that they can see how we've progressed. This process is always more than a little hectic—to memorize the notes, rhythms, language, but more so the characterization of your assignments in such little time. Just being able to physically produce the right sounds is nowhere near enough. You have to know what motivates [the characters], how they interact with the other characters, why they say and sing what they do, and so much more.

Last year I remember feeling like it was an impossible feat, but after hours and hours of weekly coaching, lessons, group rehearsals, and individual practice time, the music becomes so ingrained in you that every year we all manage to meet the deadline, (sometimes to our own surprise!). This quick learning process has actually benefited me in so many ways. Oftentimes, last minute opportunities to sing a concert or a role come up and you might only have a week or even a few days to accept and learn your music. Practicing that skill in a comfortable learning environment makes taking on professional tasks like that so much more manageable. This summer it helped me learn five roles in just a few months and prepare arias in different languages without much stress at all. This year, I noticed that the memorization of my music was so much easier, even though I had much more to learn. It's a skill most of us don't get to practice on our own time, so having it as part of the curriculum makes it a mandatory part of our skillset. 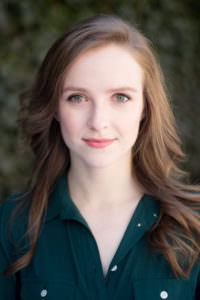 Q: What's required of you, in terms of moving from one role to another in the course of one Fall Scenes production? How do the faculty help with this process?

A: The ability to switch back and forth between such contrasting roles is absolutely demanding. To go from singing a role in French about a woman who has gone mad to the point of suicide because of lost love to suddenly switching to singing a comedic maid who is cunning and pedantic and lighthearted in German is one heck of a transition. But, in a way, all of those unique qualities help you differentiate as a performer what it feels like to be one character versus the other. Last year, singing the all-consuming and powerful role of Queen of the Night as well as the loving and tender Fairy Godmother in Cendrillon at first seemed like an overwhelming transition. But those qualities help make up the identity of each character. After living in her shoes, I would never start thinking in French or singing in the same Fairy Godmother-esque floated lines when performing Queen and vice versa. At the end of the day, it's the differences that make the switch easy. The faculty all help in this process of course, perfecting our diction, demonstrating style differences between composers, and creating characterization of our roles.

A: I don't even know where to begin when it comes to this amazing group of artists. There is never a rehearsal or recital or class where I don't learn something from my peers. We all come from such unique and enriched backgrounds that it's like a treasure trove of skills all sitting in the same classroom. I might hear someone singing an aria I have learned but they do something different in a cadenza or approach a note in such an amazing way that I can use and apply to my own singing. So often in our movement classes, when we're improvising, someone will take a risk and do something completely unexpected, which makes you feel more willing to take risks yourself and work off of that energy. Many people here also speak several foreign languages and it's so amazing to be able to ask for insight on translations and specifics on pronunciation from someone who is native to that language.

I owe the Yale Opera program so much of who I am as an artist. In our undergrad training, we broadly cover so many topics, languages, requirements, etc. But here, there is such great attention to detail given to specific skillsets that are absolutely necessary in order to succeed as an opera singer. French, German, Italian, and Russian diction are taught with such finesse and accuracy that sometimes I wonder how I stumbled my way through before my two years here. Most important, however, I have grown because I have been given the opportunity to act as an artist and take artistic liberties that I wouldn't have been given at another university, such as picking my own recital repertoire, teaching voice students, singing for top managers in the business, and performing mature roles that challenge me. Not only am I a more technically savvy singer because of the skilled guidance of my voice teacher, Doris Yarick-Cross, but I am also a more confident and independent musician. Our faculty members are some of the most experienced, intelligent instructors in their field. Learning from them every day has most definitely paid off.