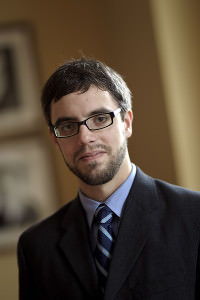 On Sunday, tenor Paul Berry, Associate Professor (adjunct) of Music History at the School of Music and the author of Brahms Among Friends: Listening, Performance, and the Rhetoric of Allusion (Oxford University Press), and Boris Berman, the Sylvia and Leonard Marx Professor in the Practice of Piano, will present "Of Love, Death, and Reconciliation: Songs and Intermezzi of Johannes Brahms." Prof. Berry has shared a few thoughts about scholarship and performance, conceiving and preparing with Prof. Berman for Sunday's recital, and "the value of live music-making."

Like many music scholars, I had been performing for years before discovering the academic disciplines devoted to the study of music. When I selected 19th century Austro-German song as an academic specialty in the early 2000s, I thought I was doing so because the subject allowed me to pursue a long-standing interest in German-language literature, but in retrospect a deeper reason was surely that my youthful instruments were voice and piano. As my scholarly interests have grown to include instrumental chamber music, the concerns of practicing musicians have remained central to my work: how the music feels in the hand or the voice, how the composer engages those feelings toward expressive ends, and how the act of musical performance can open up interpretive arenas for players and listeners alike. Brahms’ songs and piano pieces offer the historian particularly rich opportunities to investigate these questions, in part because he and his contemporaries left behind a vast array of documentary evidence that speaks to their own engagement with performance. To fully appreciate that evidence, I find I have to keep one foot in the world of the practicing musician, singing and playing the music I study rather than simply listening to it. This is one reason I love teaching at the School of Music: I learn as much from my students and their music-making as they do from me.

It was a wonderful privilege to prepare for this recital with Boris, who combines formidable knowledge of the repertoire with decades of experience playing Brahms’ music at a superb level. All told, we spent an average of more than an hour on each song we’ll perform, considering how Brahms’ compositional structures project his interpretation of each text and how the different musical choices we might make in realizing those structures could affect the listener’s understanding of that interpretation. Perhaps the most exciting part for me, however, was selecting the songs we would perform and placing them into a coherent order. The Four Serious Songs, Brahms’s last opus, are unusual in many ways, including their texts, which are not poems but passages concerning death from Luther’s translation of the Bible. These songs are usually performed continuously as a set, but, following Brahms’ own practice of creating flexible “bouquets” of songs, we decided to take them apart and use them as primary colors, emotional focal points around which other songs and short piano pieces could be grouped in provocative ways.

The piano pieces come from the collections of short works, Opp. 116-119, completed in the 1890s, that together comprise Brahms’ crowning achievement as a composer for the instrument. The songs span his entire output as a composer—from his first maturity in the early 1860s to the pinnacle of his public career in the 1870s and 1880s—and his life-long involvement with artfully arranged folksong. Some of them are quite dark, a few playful, many rich and autumnal, others light and fresh. Heard interspersed among the Four Serious Songs, the music on this program may facilitate for the audience some reflection about love, death, and the process of change—hence the title of the recital. But any such reflection will be individual, meaningful to each listener for herself alone. This, I think, is the value of live music-making in a time of pervasive distractions and pre-packaged playlists: to provide an unexpected space, an unpredictable collision of impulses, within which the self can find renewal and out of which conversation can begin again.