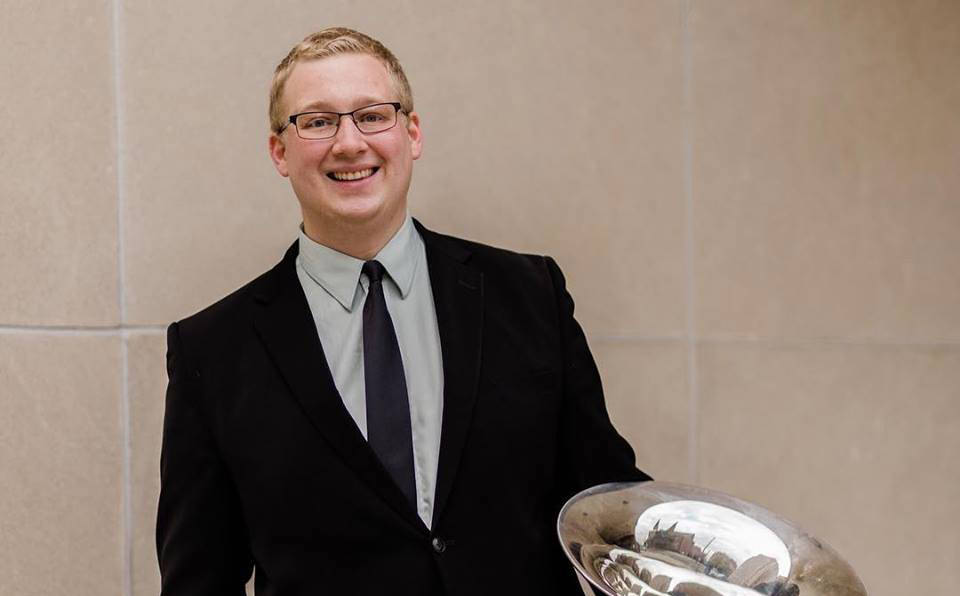 On April 5, tubist and Woolsey Hall Concerto Competition winner Jake Fewx ’18MM ’19MMA will perform Arild Plau’s Concerto for Tuba and Strings with guest conductor Carolyn Kuan and the Yale Philharmonia. We spoke with Fewx about his eagerness to challenge people’s expectations of the tuba as a solo instrument.

Q: You’re the first tubist to be a winner of the Woolsey Hall Concerto Competition. Is the tuba at a disadvantage when it comes to competitions like this?

A: This is a huge honor for me. One of the philosophies that has been deeply ingrained from my studies is that the tuba is at a disadvantage in the sense that it has several negative connotations associated with it. When an audience sees a tubist walk on stage there are several stereotypes that run through their brains (heavy, loud, brassy, oom-pah, etc.), giving them low expectations about what they are going to hear. As a classical tubist, it is always my goal to shatter these expectations by performing with a great sound and always playing with high-quality musicianship. I am very excited to have this opportunity to act as an ambassador for the tuba community and to show the world that the tuba is a beautiful solo instrument.

Q: You'll be performing Arild Plau's Concerto for Tuba and Strings. Is this standard repertoire for tubists?

A: It’s a little bit of a hidden gem in the tuba repertoire but is growing very quickly in popularity. There are some great recordings of it out there and it has been on several competition lists.

Q: Musically, what can you tell us about the Plau concerto? What would you want the audience to know about this piece before hearing it?

A: This piece is very emotionally dense. Plau composed this piece in memory of his wife shortly after she passed away. The music, understandably, is filled with a lot of sadness and grief. The piece, in my opinion, depicts the composer’s own emotional journey through his loss, including a quasi-funeral march at the end of the second movement, and closes with a very odd, confused scherzo, leaving the journey (open-ended) in a way. There is a lot of fluctuation in the mood of the piece, with the music evoking some very sad, soft-spoken melodies, some very fast, passionate runs, and some very mournful kinds of shouts in the upper register of the tuba. The writing for strings is absolutely gorgeous. They provide this very lush backdrop for the tuba melody to sink into and they provide some very fiery, passionate interludes between sections. There are a few melody trade-offs between the tuba and solo violin that are particularly effective. This piece is really beautiful and I can’t wait for the audience to hear it!

Q: Does the fact that there are fewer tuba concertos out there than repertoire for other instruments make it more difficult to choose solo repertoire?

A: Yes and no. The tuba’s lineage is very young compared to the rest of the orchestra and even younger when you consider solo literature. Ralph Vaughan Williams’ Concerto, written in 1954, was one of the first, if not the first, solo pieces for tuba by a major composer. There are some other excellent tuba concertos by John Williams, Edward Gregson, and more recently by Jennifer Higdon, but, generally, there aren’t a ton to choose from. Since tubists don't get a chance to perform as soloists too often, it is very common to hear the standard concertos. The rest of the solo repertoire for tuba is increasing in size and quality as time goes on, which is providing us with more and more great, original music for the tuba.

Q: In what ways does your mindset change when you’re a soloist?

A: When playing in an ensemble I have to wear a different hat, so to speak. Solo playing allows me to be freer and more expressive, but in a large ensemble I have to act as a foundation, always striving to produce rock-solid sound, pitch, and tempo. I often act as the bottom voice of the brass section and am most often paired with the trombones; however, depending on the piece, my role can extend outside of this. We (the Yale Philharmonia) recently performed selections from Prokofiev’s Romeo and Juliet, and I was often paired with the basses, piano, and low winds, which kept me on my toes in terms of how I approached the performance. I’m particularly fond of chamber playing because it is kind of an amalgamation of playing styles. In a brass quintet, the tuba parts are often very active and challenging, forcing me to provide a foundation for the group while also having to provide the occasional melody. All in all, each of these mediums has helped me become a more well-rounded musician.

Q: How does it feel to be performing a concerto with an orchestra of your peers?

A: It is amazing! I am so fortunate to be in a school where I am surrounded by so many awesome, talented people. I am very humbled to have been given this opportunity. I can’t wait to get on stage and share this piece with the audience!

Guest conductor Carolyn Kuan leads the Yale Philharmonia in a performance of Stravinsky’s Symphony in Three Movements, Copland’s Fanfare for the Common Man and the suite from Appalachian Spring, and Arild Plau’s Concerto for Tuba and Strings, with Woolsey Hall Concerto Competition Jake Fewx, on Friday, April 5, at 7:30 p.m. in Woolsey Hall.