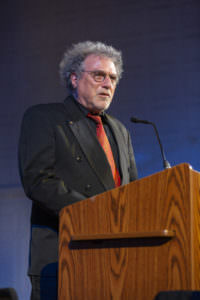 During Convocation 2019, Yale School of Music Dean Robert Blocker awarded the School's highest honor, the Samuel Simons Sanford Medal, to Martin Bresnick, "a colleague who has given distinguished service to music, to intellect, and to repairing the world." Bresnick, who in 1976 joined the faculty of Yale's Department of Music and in 1981 joined the faculty of the School of Music, is the Charles T. Wilson Professor in the Practice of Composition.

The award's namesake, Blocker said, "was the first professor of applied music at Yale and one of the founding professors of the Yale School of Music. A gifted pianist, Sanford was also one of Yale's most generous patrons." Blocker explained that "after receiving an anonymous gift in 1972 honoring Sanford's dedication to Yale and music, the School of Music established the Samuel Simons Sanford Medal.

Initially awarded to recognize the appointment of teaching fellows, the Sanford Medal is today ... the most prestigious award conferred by the School." Blocker described Bresnick as a "master teacher, a professor who has taught many of the people that adorn our own faculty and other faculties around this country and indeed throughout the world."

Blocker told Bresnick, "Your teaching and your musicianship and your creative work was so inspired that we could not help but appoint your students—David Lang, Hannah Lash, Chris Theofanidis—to come and join you as you and your former students, who are now your colleagues, continue that legacy."

"The School has give me so much more than I could ever give back," Bresnick said. "The School of Music, to me, has been my Esterházy, a place where I try things, I learn things, things were taught to me and I just try to return them as much as possible to these wonderful students. I just need to remind people ... the secret of being a great teacher is to choose really great students."

Sharing an "inverted version" of an expression he's passed on to students, Bresnick said, "When the student is ready, the teacher appears. I was happy to appear."