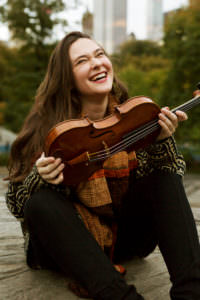 Violinist Ariel Horowitz '20MMA has received the Yale-Jefferson Award for Public Service in recognition of her leadership of the Heartbeat Music Project, which "offers music education for Navajo (Diné) K-12 students living on the Navajo Reservation," according to the organization's recently launched website. "We cultivate a safe space for our students to thrive and gain confidence in themselves, their abilities, and their local and global potential."

The Yale-Jefferson Award recognizes "sustained public service that is individual, innovative, impactful, and inspiring" and individuals who "demonstrate service that draws on the Yale community and/or resources to benefit the world beyond Yale."

Horowitz, the Heartbeat Music Project's artistic director and founder, said the leadership effort "sort of fell into my lap" during her junior year at the Juilliard School. Her mother, Amy Horowitz, an affiliate faculty member at the University of Indiana Bloomington's Center for the Study of Global Change, was at the Navajo Technical University, in Crownpoint, New Mexico, working, with a grant from Indiana University, on the "redistribution of intellectual resources," (Ariel) Horowitz said. Discussions with her mother led Horowitz, with a small grant from the Juilliard School, to Crownpoint, where she organized a five-day workshop for a handful of Navajo third-graders. "It was like a little music day camp," Horowitz said. Folks at the Navajo Technical University wanted to bring more musicians to Crownpoint to work with Navajo students in kindergarten through 12th grade. "I'd never taught a high-schooler," Horowitz said. "I was barely not a high-schooler myself."

This coming summer will be the fifth that Horowitz has led a two-week tuition-free music camp for Navajo children in Crownpoint. Enrollment is up to about 60. Horowitz is quick to point out that she doesn't do the work alone. Sharon Nelson, a Navajo woman and a graduate student in NTU's Diné studies program, has been instrumental. "She has added a really important cultural component for out camp," Horowitz said. Specifically, Nelson has served as a generational bridge. Camp attendees don't speak Diné, Horowitz explained, and the elders with whom they live don't speak English. (According to a 1993 article in The New York Times, "Diné ... is an Athapascan word for man, but has been translated as 'the people' by the Navajos, who routinely use it to refer to themselves and their language.")

"A lot of YSM students have become involved," as well, Horowitz said. Violinist Greg Lewis '19MM, to name one, is the organization's communications director. The classical music scene is competitive, Horowitz said. Working on an initiative like the Heartbeat Music Project offers "a different perspective on what's important."

A lot of students who attend the annual music camp "haven't seen Western instruments before," Horowitz said. "Their lived experience is so drastically different from mine." The Navajo people, she pointed out, face "massive systemic inequity" and "intergenerational trauma."

Horowitz's goal for the project transcends music. First and foremost, she wants Navajo children to have a meaningful experience "because there's not a lot of that to go around" on the reservation. She wants to help children reach a point at which they can be academically competitive without losing contact with their traditional Diné culture. Horowitz is learning as she goes. "People get degrees in nonprofit management," she said. "I'm a violinist at a music school." Still, she said, "I feel proud of how I've risen to the occasion, to the challenge. I honestly think I'm a better person for it."

Receiving the Yale Jefferson Award, though, is overwhelming. "I feel kind of awkward," she said. "I am fully aware that while the Heartbeat Music Project is a really fantastic endeavor, it's a drop in the bucket. I don't think one person can affect the change that needs to happen." She does hope the award provides a platform from which she can encourage other musicians to broaden their perspectives. "I get excited every time I see a project like this."