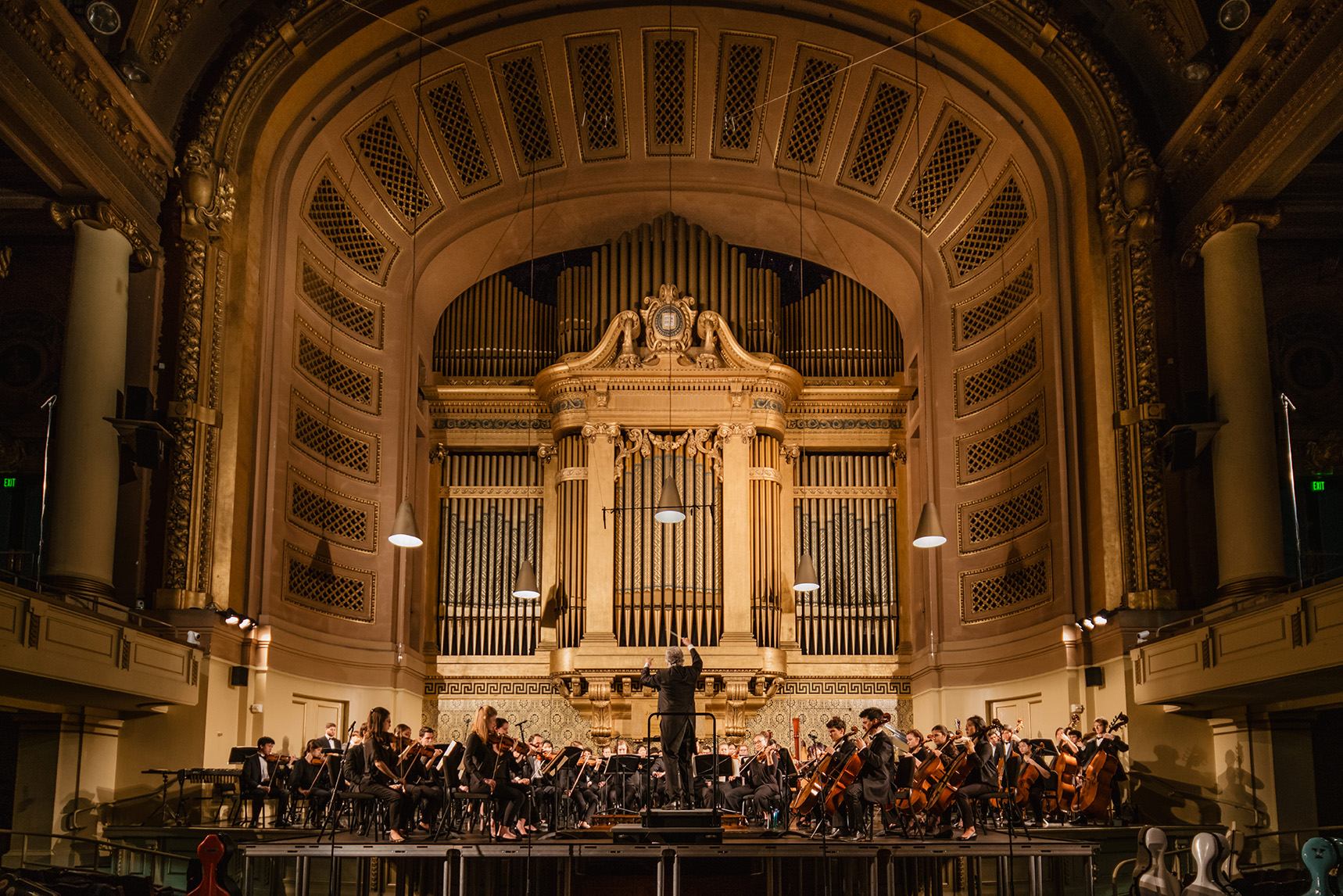 The Yale School of Music is pleased to welcome audiences back into the University’s concert halls for a season of compelling performances by distinguished faculty, renowned guest artists and ensembles, alumni, and current students. “After two years of disruption brought on by the COVID-19 pandemic, the YSM community is eager to engage once again with concertgoers from the local community and those in cities around the world who watch and listen to the School’s many extraordinary concerts online,” YSM Dean Robert Blocker said. “We look forward to gathering in our magnificent concert venues and sharing moments of breathtaking awe and wonder.”

This coming season, the Yale Philharmonia, YSM’s dynamic student orchestra, which performs in the University’s magnificent Woolsey Hall, will give a historic performance of the Piano Concerto in C minor by Helen Hagan, who, in 1912, became the first Black woman to graduate from the School of Music. Other Yale Philharmonia concerts this season will feature performances of familiar and new music, including works by Bartók, Beethoven, Bruckner (utilizing a new, critical edition of the composer’s Seventh Symphony by Professor Emeritus of Music Paul Hawkshaw), Debussy, Laura Karpman, Mahler, composer and YSM alum Cindy McTee ’78MM, Stravinsky, Tchaikovsky, and Vaughan Williams, under the direction of Principal Conductor Peter Oundjian and guest conductors Carolyn Kuan—“whose gifts,” WNPR has said, “are increasingly becoming known throughout the music-loving world,” and Leonard Slatkin, whom the Pittsburgh Post-Gazette has called “one of the world’s leading conductors.” Among the soloists who will appear with the orchestra this season is acclaimed violinist and YSM Artist-in-Residence Augustin Hadelich, whom The New Yorker has described as “a singularly gifted, characterful musician.” The Yale Philharmonia will also perform a New Music for Orchestra concert, featuring works by the School’s visionary composition students, on the New Music New Haven series, and a Gala Concert with the Yale Opera, whose season will also include fully staged productions in the fall, winter, and spring that introduce audiences to singers the New Haven Register has described as “amazing young talents on the cusp of a professional career.”

In addition to two performances by the resident Brentano String Quartet, which The Daily Telegraph (London) has called “an ensemble of exceptional insight and communicative gifts,” the School’s Oneppo Chamber Music Series, which takes place in the acoustically superb Morse Recital Hall, will welcome to Yale such celebrated guest ensembles as the Miró and Rolston string quartets—the former will be joined by faculty clarinetist and series Artistic Director David Shifrin—the Horszowski Trio, which includes YSM faculty cellist Ole Akahoshi, Sō Percussion, a group of YSM alums that The New York Times has said “has helped to ignite an explosive new enthusiasm for percussion music old and new,” and the legendary Handel and Haydn Society, which explores Baroque and Classical repertoire through invigorating historically informed performances.

The Horowitz Piano Series, named in honor of the revered pianist Vladimir Horowitz, who left his papers to Yale upon his death in 1989, will open in Morse Recital Hall with a performance by faculty pianist and series Artistic Director Boris Berman of music by Brahms and Ukrainian composer and refugee Valentin Silvestrov, with whom Berman began collaborating in the Soviet Union in the 1960s. This year’s Horowitz Piano Series will also feature performances by the School’s faculty pianists—including Blocker, Deputy Dean Melvin Chen, and Wei-Yi Yang—and esteemed guest artists Jan Jiracek von Arnim and Yefim Bronfman, whom The Wall Street Journal has described as “a powerhouse virtuoso who appears unruffled by the most demanding works in the repertoire.”

Fifty years after Willie Ruff, now Professor Emeritus of Music, brought 40 giants of jazz to Yale, including Charles Mingus—whom NPR has called “one of American music’s greatest innovators”—the Ellington Jazz Series, which was launched with that 1972 event, will celebrate the 100th anniversary of Mingus’ birth. The 2022-2023 Ellington Jazz Series will also welcome to Yale the all-female DIVA Jazz Orchestra, which The Washington Post has said makes music with the "vigor and complexity of the big-time big bands,” saxophonist George Coleman, Jane Bunnett and Maqueque, and Jesse Hameen II & Elevation, a group led by the “prominent drummer … who played a big part in the revival” of jazz in New Haven, according to The New York Times.

The School’s 2022-2023 concert season will also showcase contemporary works composed by faculty, students, alumni, and guest artists on the New Music New Haven series, which introduces audiences to the pioneering composers who are shaping the sounds of tomorrow’s musical landscape. Among those whose work the series will celebrate this year is the late, longtime YSM Lecturer in Composition Ingram Marshall, who died in May.

This coming season will also see the anticipated return of the Faculty Artist Series, which showcases the remarkably accomplished musicians with whom gifted students come from around the world to study. Such beloved student ensembles as the Yale Cellos, led by faculty cellist Ole Akahoshi, and the Yale Percussion Group, under the direction of Robert van Sice, will also perform, as will students from several of the School’s studios. In addition to performing in those settings and others, the School’s students will perform throughout the year on YSM’s Lunchtime Chamber Music and Vista: Chamber Music series, and in individual recitals. Vocal ensembles based at the Yale Institute of Sacred Music will also present concerts during the 2022-2023 season.

Many concerts presented by the Yale School of Music are free and open to the public, and the vast majority of concerts are streamed live for audiences around the world. Learn more about YSM’s 2022-2023 concert season at music.yale.edu/concerts.