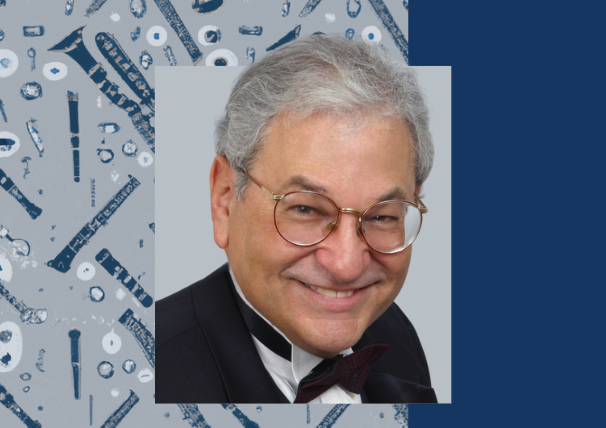 Generations of clarinetists who have studied or are currently enrolled at Yale College and the Yale School of Music will gather Sunday, Dec. 4 for a performance that showcases the instrument and the musicians for whom it is an extension of themselves. Organized by faculty clarinetist and Oneppo Chamber Music Series Artistic Director David Shifin, the Yale Clarinet Celebration will feature performances of repertoire ranging in style and genre from Klezmer and jazz to classical, marches, and new music that incorporates extended techniques and choreography. The concert will also make use of instruments ranging in size and range from the contrabass clarinet to the E-flat instrument. Most important, the performance will bring together about 30 artists who are connected not just by the clarinet but by Shifrin, their mentor and friend.

The biggest reason to do this, Shifrin said, is to introduce alums “who have vibrant careers” to current students who are on the cusp of the same. While the field of music is an inherently competitive one, Shifrin pointed out, “there’s something about the School (of Music) that engenders camaraderie.” And it’s certainly not instrument-specific. “I’ve been inspired forever by Aldo (Parisot) and the Yale Cellos,” Shifrin explained, also mentioning the annual Bassoonarama program organized by faculty bassoonist Frank Morelli, guitar-centric chamber music performances by faculty guitarist Benjamin Verdery and his students, the Yale Percussion Group led by faculty percussionist Robert van Sice, and other such programs.

Vincent Oneppo ’73MM studied clarinet at YSM before Shifrin arrived in 1987 and got to know him through concerts like this one—a tribute to Benny Goodman that Yale presented in 2009, a Yale in New York program called Music for Clarinets that was performed on campus and at Carnegie Hall 10 years later, and others. Asked about the roster for the Dec. 4 event, Oneppo, who worked on the YSM staff for many years, said, “I knew a lot of these people as students,” and that “the atmosphere (Shifrin) creates among his students is really wonderful.”

Shifrin started playing the instrument after a moment of inspiration in 1956. “I took up the clarinet because I saw The Benny Goodman Story as a kid,” he said, referencing the movie. Similarly, Shifrin’s students have dedicated their lives to the instrument after hearing their mentor play it.

“Growing up, I listened to his (Shifrin’s) recordings all the time,” Seunghee Lee ’92MM ’94AD said. “He’s been an instrumental figure in my career. Without him I would not be here.” Lee, whose album Aspire was recently nominated for a GRAMMY Award, is looking forward to returning to Yale—looking forward "to just being in that sound—that sound of David Shifrin multiplied.” That comment was not meant to imply that Shifrin’s students sound like he does. Rather, it’s a reflection of the imprint he leaves on their aspirations. “We took a piece of him with us out there in the world” when we graduated, Lee said of her fellow alums, and “we’re all coming together to make one picture.”

That’s exciting for current students like Nikki Pet ’23MM, whose contributions to the program go beyond performance to include original animation that will accompany the clarinet-quartet premiere of Joan Tower’s Fanfare for the Uncommon Woman No. 5. Pet looks forward to connecting with Romie de Guise-Langlois ’06MM ’07AD. “I’ve read about her in musicology books,” Pet said. The program itself, Pet said, offers all involved a chance to experiment through music like Construction for Multiple Clarinets, a work by composition student and clarinetist Emily Liushen ’24MM that uses multiphonics and includes choreography. “It’s rare to have that many clarinetists together at once,” Pet said. “It’s incredibly exciting—especially coming out of the pandemic,” which affected wind players and singers more than other musicians.

“I try to cover a lot of bases and a lot of styles and give everybody a chance to shine,” Shifrin said, giving evidence to Pet’s assertion that Shifrin “sees his students as fully shaped musicians.”

“The atmosphere he creates among his students is really wonderful,” Oneppo said, sharing his opinion that the Yale Clarinet Celebration will serve as “an appreciation for how great the clarinet classes have been at Yale, and what a wonderful teacher (Shifrin) is.”

“Clearly,” Oneppo said, he takes joy in working with his students and his alumni and clearly is just overjoyed at their success. And he loves the clarinet.”

The Yale Clarinet Celebration takes place on Sunday, Dec. 4 at 3 p.m. in Morse Recital Hall. Admission is free and open to the public. Learn more about the program and the performers here.