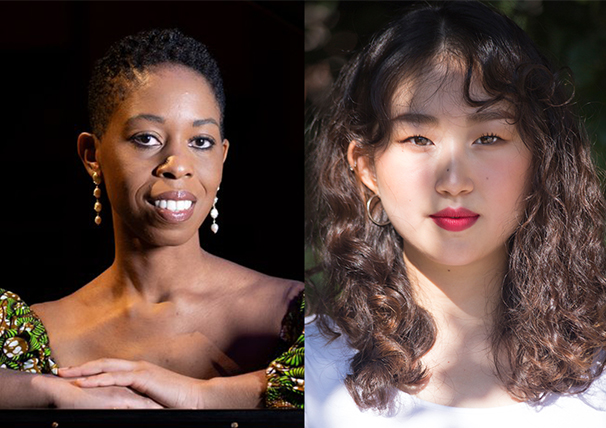 On Oct. 21, pianist and musicologist Dr. Samantha Ege will join Principal Conductor Peter Oundjian and the Yale Philharmonia for the world orchestral premiere of Helen Hagan’s Piano Concerto in C minor, featuring a new orchestration by composer and distinguished YSM alum Soomin Kim ’21MM ’22MMA. Ege earned a bachelor-of-arts degree in music from the University of Bristol and a Ph.D. in musicology from the University of York. She is an Anniversary Research Fellow at the University of Southampton and was the Lord Crewe Junior Research Fellow at the University of Oxford’s Lincoln College from 2020 to 2022. Kim, who hosted the Yale School of Music’s five-part Women’s History Month podcast Simply Listen: Women in Dialogue in 2021, has won the ASCAP Foundation’s Morton Gould Young Composer Award. Her music has been performed by the Cleveland Chamber Symphony, as part of that organization’s Young and Emerging Composers Project, and at the Aspen Music Festival and School, Bowdoin International Music Festival, Yale Summer School of Music/Norfolk Chamber Music Festival, and soundSCAPE festival. We spoke with Ege and Kim about Hagan, who, in 1912, became the first Black woman to graduate from the Yale School of Music, and about the Concerto in C minor.

Q: When and how did you first encounter Helen Hagan’s Piano Concerto?
Ege: I first heard about Helen Hagan around six years ago as I was starting my doctoral research on her contemporary, Florence Price. I learned of a concert that took place in Chicago in 1915 called the Second Annual All Colored Composers. Helen Hagan performed this piano concerto in its two-piano arrangement with a well-known pianist in the local Black concert scene called T. Theodore Taylor. According to the Chicago Defender (which was one of the most widely read Black newspapers in the country), Hagan's performance was one of the highlights of the program. When I saw Hagan's handwritten manuscript at the Center for Black Music Research at Columbia College, Chicago, I could definitely see why. The music is an incredible glimpse into the breadth of Hagan's talent, not just as a composer, but as a stunning virtuoso.

Q: In what ways has learning the piece and about Hagan informed your work as a pianist and scholar
Ege: What really struck me was that Hagan composed this piece in 1912. While Florence Price is celebrated as the first Black woman to have a symphony performed by a major national orchestra, Hagan's achievements show that Black women were composing large-scale orchestral works much earlier. To me, Hagan's life and music suggest a much longer history of Black female symphonic composers—even if we don't necessarily know their names. But Hagan evidences the depths of this hidden history. So, as a scholar, I always try to write with an awareness that there are many other Prices and Hagans out there, and we can frame historical Black women's classical music accomplishments in a way that acknowledges the wider possibilities.

As a pianist, Hagan's music has taught me so much about her technique, power, and expressivity. I identify her as a Black Renaissance composer, in reference to the era of rich African American artistic and intellectual expression that swept through the first half of the 20th century. Many Black Renaissance composers looked to African American folk songs to shape their classical voice. But in this concerto, I don't hear those references at all. Hagan is a Romanticist, but she experiments with the tradition too, exploring harmonic and rhythmic ideas that are distinctly hers and distinctly modern. This is what inspired me to include Hagan's piano concerto, arranged for two pianos, on my Black Renaissance Woman album and make the world premiere recording of this piece. I wanted Hagan's voice to be heard, but I never imagined that this would lead me to step even further into her world with a performance at Yale.

Q: What compelling musical ideas did Hagan present or introduce in her work, and what can the piece tell us about her playing?
Ege: One word comes to mind with Hagan's concerto: bravura. There are moments where it feels like the piano is rumbling under my fingers. There is a storminess in her writing, which suggests her power as a pianist. But there are also moments in the music where the clouds clear, making way for beautiful rays of light. Gorgeous, lyrical melodies emerge, showing us that she is a highly sensitive performer. While she can give us thunder and drama, she is not a "style over substance" composer at all. There is so much emotional and intellectual depth to her writing, and she must have communicated this brilliantly as a performer.

Q: How did Hagan’s Piano Concerto fit into the broader landscape of Black artistic movements in America?
Ege: Helen Hagan's Piano Concerto is undoubtedly steeped in the late 19th-century Romantic tradition. I hear the influences of many German composers from this time in her music. But this is unsurprising because Hagan, as well as so many of her contemporaries, studied at top music conservatories across the United States where German symphonic traditions hugely influenced pedagogy. So when we hear these influences in the music of early 20th-century African American composers, what we are hearing is not imitation. It is a reflection of their intimate musical knowledge and rigorous training. What is interesting, though, is that while so many white male composers of the early 20th century venture into the harsh, dissonant and disjointed tropes of modernism, Black classical composers of this time are looking to find harmony in the past and articulate an uplifting vision for the future. Many of Hagan's contemporaries did that through bridging Black folk melodies with classical conventions. While Hagan's Piano Concerto doesn't engage folk songs and Negro Spirituals, her Romantic voice—filled with rich harmonies and hopeful overtones—very much belongs to a tradition that encompasses African descended composers from Samuel Coleridge-Taylor and Robert Nathaniel Dett to Florence Price and Nora Holt.

As a classical composer, Hagan is not an outlier to the Black concert tradition nor is she an outlier to the wider landscape of Black artistry at this time. Even though histories of early 20th-century Black women in music tend to focus on their contributions to jazz, blues, and theater, classical music plays a transformative role in African American history and Hagan—as the first Black female music graduate at Yale—is a trailblazing figure in that landscape.

Q: How has Soomin Kim’s orchestration informed your approach to the piano part?
Ege: Soomin Kim's orchestration is absolutely fascinating. She has brought Hagan's music to life in a way that I have longed to hear ever since I first saw the concerto. Soomin's work has inspired me to reshape my interpretation in parts too. She has illuminated new ways for me to hear and perform this work. The orchestration represents an incredible transhistorical and transcultural musical conversation between the three of us—Hagan, Soomin, and myself. It is an honor to be a part of this project and to have my connection to this music grow even more as a result of Soomin's fantastic work.

Q: What of Helen Hagan’s manuscript was available to you, what was your approach to creating an orchestration from that extant material, and what kinds of scholarship did you bring to that work?
Kim: I received a scanned copy of Hagan’s manuscript, which was in a two-piano version. Most of the notes were there, and even some scribbles about what instruments she was going to use to orchestrate a certain passage. However, it was missing a lot of dynamics and detailed tempo markings. It also didn’t specify the instrumentation of the orchestra.

In orchestrating it, I had to keep in mind that this was a short score, and not a piece written for two pianos, because writing for the orchestra and writing for the piano are completely different. For example, the orchestra has a wider range than the piano, and it is capable of sustaining a note unlike the piano, which has a quick decay. It meant that the second piano part, which represents the orchestra, had to be filled in a little further. It was as if I had to take the essence of the music and reimagine it in the context of the orchestra.

I studied other pieces in the repertoire to make sure my orchestration was appropriate to the style this piece is in. I listened to early Romantic piano concertos, orchestra pieces with a march-like sound, and symphonies written by American composers who were contemporaries of Hagan. Some of the pieces I looked to the most were Mendelssohn’s Piano Concertos, Amy Beach’s Piano Concerto in C-sharp minor, and Florence Price’s Symphonies, especially No. 3. I also worked on the orchestration with some of my mentors, Martin Bresnick and Chris Theofanidis, to whom I am so grateful.

Q: How did you remain faithful to Hagan’s musical intent while building an orchestration from what was available of the score?
Kim: I kept every (piece of) information Hagan had on her manuscript—notes, expression markings, tempo fluctuations, dynamics—and added some more when necessary. While most of what I added were dynamics and expression markings, I also added some colors that I thought would help keep the orchestral texture alive. For example, I added muted trumpet, gave the strings some activity by adding tremolos or trills when there was only a single held note in the manuscript, and doubled the woodwinds by an octave or two for a brighter sound. I tried to bring to life Hagan’s bold and powerful ideas through orchestral imagination.

Q: What have you learned through the experience of creating this orchestration?
Kim: I learned so much about orchestrating. First, the orchestra is an infinite palette of colors! There are countless ways you can orchestrate a passage and there is no right way. That’s what makes it hard as well, because I would sometimes sit on a passage and second-guess my orchestration choices for too long.

I also got to learn about Helen Hagan. I didn’t really know anything about her before I took on this project, but I learned that she was an extraordinary composer who had an extraordinary career. I am excited for people to hear her Concerto and get to know more about her.

Q: Has this experience inspired how you’re thinking about your own music/career as a composer?
Kim: Yes. The experience further proved to me that there are so many marginalized composers of the past who have unfortunately been forgotten. As a composer of color, I see very clearly that it’s an alarming reality. It’s inspired me to reflect and try to find ways to bring life to those artists.