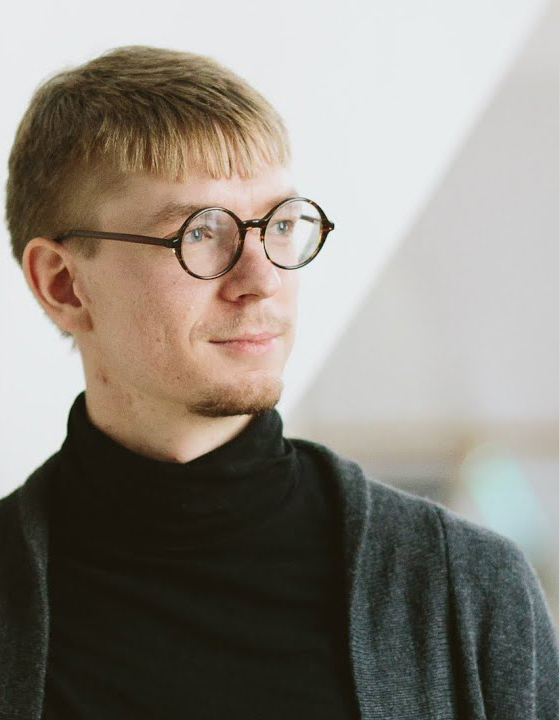 “Altering the world — that’s what you do,” Auznieks adds of working as a composer. “It’s my way to be myself and find myself and discover my relationship with the world. Composing came to me more than I came to it.”

And come to him it has. Auznieks is working on multiple commissions when we speak from Europe where he is now located. Recent commissions have included works for the Atlanta Symphony, a guitar concerto for Sinfonietta Riga, and a piece for the Los Angeles-based Kaleidoscope Chamber Orchestra. In 2021, he received the main prize from the International Rostrum of Composers in the Composers Under 30 category. His works have been performed at Carnegie Hall, the Kennedy Center, Prague Quadrennial, and the Beijing National Arts Centre, to name just a few.

This summer his chamber piece, Brass, will be performed once again on July 29. It first premiered when he was a Norfolk Fellow at the Festival in 2018.

Figuring out how to write for that reality, though, is part of the intellectual challenge Auznieks enjoys in composing. “It’s fascinating to work with an instrument that’s not usually your own. How do you overcome this gravity, this resistance?”

Take trombones, for instance. “One of the ways I could overcome limitations, the slowness, is this ability to move between two pitches seamlessly,” he says of some of the choices he made in this piece, his first for brass ensemble. “With so many instruments you can’t go in between pitches. Here you’re going in between. It’s an attempt to escape the place we’re normally in.”

“In everything we do, we have to do things that don’t come easily. We learn more [in those circumstances] than we learn in almost anything else.” he continues. “You have to redefine how you do things. I love overcoming limitations. It’s such a creative space.”

Auznieks cites poetry, in particular the works of Wallace Stevens, as among his inspirations. “The best of poetry challenges us to think about what is possible and what isn’t. Stevens opens what language can do and music is like that too potentially,” Auznieks says. “My music is not narrative. If you want to tell a story, a story is a much better medium for that.”

Auznieks spends a lot of time doing what he calls fooling around when he composes. “Others call it working,” he says. “I spend a lot of time not deciding anything. Sometimes I spend weeks at the keyboard trying things out.”

“Sometimes I find something that fascinates me but I don’t fully understand it,” he adds. “It could be a chord I find interesting. I need this one thing that will be the source for everything else. To do that you have to search and be open to things that come to you.”

Right now, for instance, Auznieks is fascinated by roses. “I read about the meaning of roses in romantic pieces and other places. Think about its structures, its biology — every aspect of this single symbol.” How this translates into the music he is composing when we speak remains to be seen … which is just fine with Auznieks.

“My music doesn’t represent a rose but gets its smell or scent from the rose,” he says. “It behaves like a rose.”

To hear the Amo Brass perform Auznieks' Brass, join at the Music Shed on July, 22, 2022 at 8 pm. Click for TICKETS and INFORMATION.